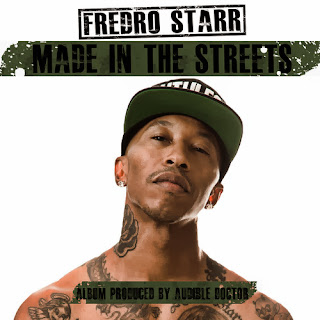 First off this is my first review ever so I hope to not sound unprofessional and what not so please stick with me as I get familiar with reviews.

When I first say that Audible Doctor and Fredro did a single together, I was surprised. Then I heard it and it really impressed me. For a minute there they were leaking tracks out and talking about a collaborative project, I thought nothing of it really. Fredro was never a rapper I followed or even paid much attention to since Onyx took a break. I actually bought his "Firestarr" album on cassette back in 2001 and bumped it for a few. I don't recollect his "Don't Get Mad Get Money" album tho. So for me it's been since '01 since I heard anything from Fredro. Come 2013 I start seeing his name and he's working with Audible and getting back with Onyx to work on new material as well as his "Firestarr 2" album.

Now Audible I've listened to hear and there but never officially heard a whole project of his. I have been a fan of the Brown Bag Allstars music and really appreciated the style of hip hop they put out especially in today's hip hop. I went back to listen to "Firestarr" to try and compare Fredro then to now and with this new album "Made In the Streets" I'd have to say it is huge step for Fredro's career in my opinion. Being that he comes from a hardcore group and has made classics like "Slam" and "Shut Em Down" I didn't know what to expect from him both flow and lyric wise and then Audible beat wise. But these two have come together to make an incredible album.

The growth and experience of Fredro really shines throughout this whole project . I expected him to be loud and gutter and the beats to be hard. Fredro's vocals really compliment the beats of Audible, his flow stays smooth throughout the whole album and the content is very real as well. Fredro seems as real as I've ever seen him be as an emcee with his topics like on tracks like "This Ain't My Day" and "What U Goin Thru". As far as Audible he amazed the shit out of me with each beat. If he can make 3 projects a year all like this then he'd be the next Statik Selektah. I really can't think of a beat I didn't like.

Now in one hand I like how they didn't have any predictable features like Action Bronson or even their own camp artists like Sticky Fingaz or Koncept. But in the other hand I think their features they did have could of been better. The only track that I wasn't feeling was "Hit Man 4 Hire" featuring Philly Swain, it just seems like it comes out of left field from the rest of the album and its just a typical Fredro track. Other than that this album is definitely worth a buy and storage in your classic albums.