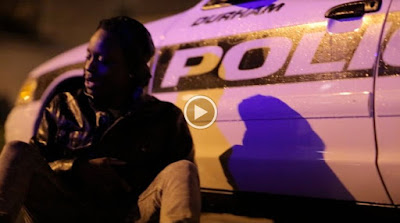 With gun violence and police brutality at the fore of much discussion in 2016, North Carolina emcee Mark Steele hasn't been one to stray from the conversation. The recent tragedy of Keith Lamont Scott in particular hit close to home for the rapper, and he expresses his sentiments in his new music video for "Turn Around", the third single from his forthcoming album Almost Time, slated for release October 28 and featuring guest appearances from Raheem Devaughn, and Rapper Big Pooh.

"Keith Lamont Scott was murdered by police, on the very next block behind where I currently live in Charlotte, NC.  I'm born and raised in Durham, NC (Bull City) so being that close to murder isn't unusual to me at all.  We made "Turn Around" in the spring of 2015 at Patchwerk studios in Atlanta, GA because we were inspired by the chaos around us.  Seems like every time we turn on the TV there was another killing and then another protest turned violent. All that did was trigger memories of my teenage years living in Durham, and dealing with the grief of too many of my actual friends being killed.  Seemed like every time I turned around one of my classmates didn't make it back to school on Monday.  It makes me so angry to hear about another black man being killed by a cop, but instead of going out to protest or riot with the rest of the people in charlotte; I'd rather express my frustrations through art." - Marke Steele