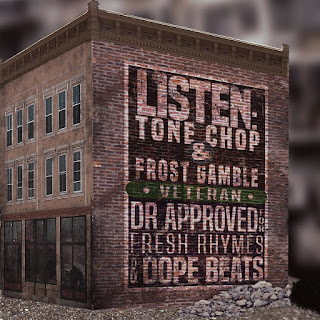 Once rivals in upstate NY's rap battle scene, Binghamton rapper Tone Chop and Winnipeg based producer Frost Gamble have released their new EP "Veteran" today through Seven 13 Music & Entertainment.
Their first official collaborative project, the EP is a warm up for a new album planned in 2017 and includes the single "Leave It Alone" featuring Ruste Juxx and Nobi, a tribute to the late Sean Price. Stream here: https://soundcloud.com/seven13music/sets/tone-chop-frost-gamble-veteran

The first song "Dedication" is homage being paid to the hip-hop legends from all around who paved the way.

Song two "Back in the Days" features a hook sample from the hip-hop classic from Ahmad "Back in the Days". Tone really paints a picture of what life was like when he was a young gun in the streets, to him learning the streets weren't for him, to now being grown with kids and he when he sees today's kids in the streets he tries to explain that the streets are not worth it. There's something bigger and better for them, using music as the main example.

Song three "Other S**t is a slow moving, eerie street and hip-hop anthem. Tone lets you know not to f*ck with and the same with Awful P who also reminds you that he has a voice in the street and once he's gone, anybody left is lost.

Song four "Better with time" featuring DJ Waxamillion & S.One is a horn infused beat with the traditional features of golden age of hip-hop with scratches infused as well. It really is Hip-Hop 101 like Tone said himself.

Song five "One Two" Tone is MCing with some boxing references like "Never took a loss, if I did it was a fixed one" hence the title One Two. He doesn't care what you rate him, he knows he's dope. Classis braggadocious hip-hop.

Song Seven "Step Up" is a cool closer with more braggadocio. Tone is saying that you can't f*ck with him or his catalog, he belongs in the hall of fame.