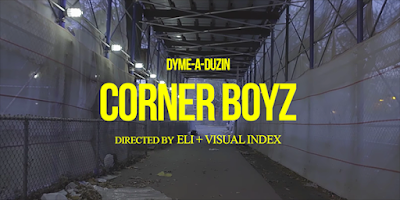 Dyme-A-Duzin finished his year strong in 2016. Sustaining the momentum from Q4, Brooklyn’s rising star dropped off “Ghetto Olympics” to start the new year off. Now, halfway through Black History Month, Dyme drops a new video for his single, “Corner Boyz.” If it sounds familiar, it’s because the single was actually teased in the last video he released for “That Chicken (Remix)” featuring Fabolous in Fall ’16.

The video, directed by Eli Salcedo, stars a young Dyme (played by Josh Phillips) who receives good ole’ maternal advice from his mama: “Donovan, don’t you be messin’ with those boys on the corner!” Throughout the video, shots of Crown Heights, Brooklyn, are seen, as the young Dyme walks through his own hood, passing corners and witnessing various activities in the streets. Even though he comes in contact with these things, his point-of-view and direction is molded by his mother’s core values and wisdom. And he soon realizes that the streets isn’t where he wants to be.