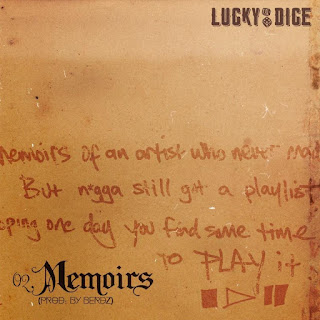 Boston mainstay Lucky Dice is gearing up to release his hotly anticipated new album, M.O.S.A. (Memoirs of a Starving Artist), in just a couple weeks. And based on his new single, “Memoirs,” it’s clear that the rapper is poised to further cement his place in the city’s storied Hip-Hop scene.

The track is a personal and thoughtful look into the life of Dice, who talks candidly about being a struggling underground artist. But he delivers his bars without any bitterness or frustration, just a raw honesty that Hip-Hop heads of all kinds will instantly love. And as for that horns-laden, head-nodding instrumental, it’s from fellow Bostonian Berdz.

Fans of Northeastern rap have become familiar with Dice over the past few decades through his own solo work and frequent collaborations with REKS (who appears on the new album). While Dice has released previous projects such as 2013’s Blowing Smoke, he considers M.O.S.A. his proper debut. So it’s only fitting that the music we’ve heard from it so far—”The Underground” and “Memoirs”—has been nothing short of outstanding.