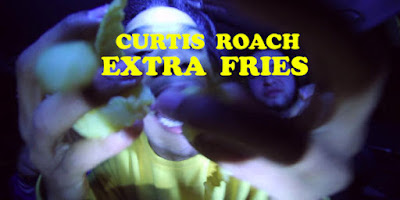 From Detroit we get the pleasure of working with the little homie Curtis Roach once again. At only 17 years of age, Curtis is a new generation of emcees showing mad love to old school hip-hop with their choice of boom-bap beats and flows dipped in that ’90-era swag.

Following the release of The Avenue mixtape in August of 2015 and the openhearted uplifting EP Smile Anyways, that dropped the summer of 2016, Curtis looks to proceed with a few new projects this year. Starting off he drops the loose single "Extra Fries" which he brings us in visual format. Produced by paysndu, the song brings that raw and gritty sound of the 90s into 2017 with a complex lyrical approach as it is filled with non-stop clever punchlines , intricate flows and a deadly delivery. Curtis also has moments of political satire against Donald Bitch, fittingly as the song was dropped on his inauguration day.

In the video he takes us on a joy ride through Detroit with the homies. With an ode to Busta rhymes - Everything remains raw ,you can catch an animated curtis and crew vibing out in a car full of Fries. Extra Fries basically is the visual representation of the dopest late night food run of all time.

Look for more form this talented youngster as he plans to make major noise in 2017.