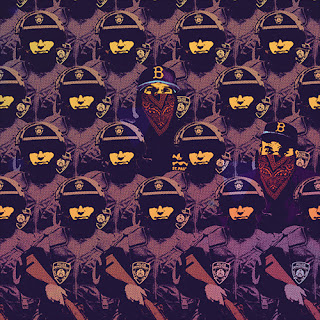 NYC MC 'Saga' and Chicago Producer 'Thelonious Martin' went from sending tracks back and forth to one another, to coming together to bring us this 12 track collaboration album 'Molotov'. Below I highlight what I believe are the highlights of the record.

The first track 'Intro' sets the tone for the album.

'Mongolian Cashmere' stood out to me when Saga said arguably my favorite line on the entire project, 'Dry humpin is the closest you'll come to grindin. Classic Hip-Hop wordplay.

On 'Misunderstood' Saga speaks on how life is only made harder for him due to how misunderstood he is, but the world raised him to be that way.

'Karma' featuring Freddie 'Gangsta' Gibbs is a track where both MC's give insight on how they grinded to get where they are now but how it didn't happen over night, it was a slow start and a lot of L's had to be taken.

'Where We Live (Brooklyn)' Makes me feel like I'm in Brooklyn. Great 2017 anthem for the city. The vivid imagery is painted purely by the beat and Saga's cold New York grit in his voice and delivery.

'All I Know' Grand. Monumental. Hip-Hop. My favorite part of this song and probably the whole record is when Rapper Big Pooh Shouts out Northern VA (where he's from). Being from VA myself, I will have this playing when I walk and drive downtown in my city on the regular.

'They Don't Know' features the classic 'Inside my Love' sample by Minnie Riperton, a very relevant, and still to this day regularly used sample in Hip-Hop. This landmark sample has been used by Tribe, Dre, Isaiah Rashad, Cole, Pac, Slum Village, Dilla, Tragedy Khadafi, etc. And now by Thelonious Martin. Simply put 'It's like they (all of us) don't know love' is subject of this song. That can't be argued against if we look at the division of the world, even in Hip-Hop between the 'old' or 'traditional' 'real' hip-hop heads, and the new school.