Stream Quelle Chris's - Being You Is Great, I Wish I Could Be You More Often [Album] 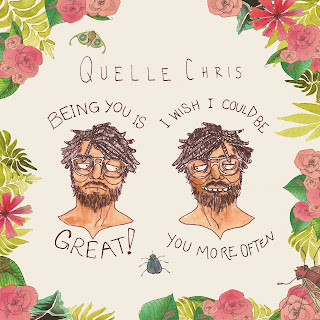 Being You is Great, I Wish I Could Be You More Often, is one of the most poignant, self-aware, and hilarious rap albums in recent memory. We should probably offer him some flowers, a case of expensive liquor, and cover the bill for the group therapy session. For the Mello Music Group release, Quelle assembled a veritable hip-hop Justice League: Roc Marciano, Homeboy Sandman, Denmark Vessey, Jean Grae, Elzhi, Cavalier, et. al. Then there’s the production, mostly handled by Quelle, but aided by crucial assists from MNDGSN, Iman Omari, Chris Keys, Swarvy, and Alchemist. Despite the preponderance of talent sharing the stage, the guests bend to the world that Quelle created. A darker shade of psychedelia, as if Madvillain gobbled anti-anxiety pills instead of psilocybin. Or maybe a fraternal drunken twin to Open Mike Eagle’s “Dark Comedy.”The title comes from a real-life discussion about the difficulties of consistency. How each of us are subject to both our own bad spirits and bursts of inspiration, those unavoidable Serotonin and dopamine peaks and valleys. Being You is Great is an attempt to catalog those moods. It’s about learning to love, or at least recognize, the best and worst of one’s self. It’s about loneliness and comfort. Learning to hate love and learning to love hate.

Peep the latest video as well.