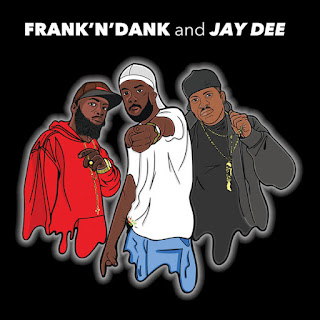 Detroit’s Frank Nitt went diggin’ in the J Dilla (aka Jay Dee) vault and found three previously unreleased Frank ‘N’ Dank cuts. Recorded at Dilla's Clinton Township, Michigan studio in 2002, on the heels of Frank ‘N’ Dank’s LP 48 Hours, this Dilla recording session remained locked away for a decade and a half.
"These cuts are unheard. Never on a mixtape. Never on a test pressing. These ain’t ever been out. Nobody’s ever had their hands on them. Maybe someone in Dilla's inner circle, but never in the club, never on the radio,” says Nitt.

On April 22nd, Record Store Day 2017, Delicious Vinyl will make the long-lost recording session, including the instrumentals, available for the first time.

Only 2000 copies will be pressed, each on red vinyl, and it is expected to be one of the most sought-after Record Store Day 2017 releases. Hunt for this rare 12” EP at your favorite independent shop on Saturday, April 22.