Devin The Dude at the Kung Fu Necktie (Concert Review)


I was fortunate enough to go to the Devin the Dude show at the Kung Fu Necktie in Philly's Fishtown neighborhood this past Thursday, sponsored by Flash Mob Productions. The Houston legend was proceeded by a slew of talented underground emcees from Philly, or it's surrounding area, including Yikes the Zero- who was set with O-Severe, Tommy Tucker, and E. Grizzly, all in which make up the collective Radioghost, Mai Spann, and Torito. The lineup took the helm on a cozy little stage, arched by a piny looking ceiling. Some were accompanied by live percussion, professional quality DJs/beatmakers, and whoever else they felt worthy. Even in a bar that was equipped with a pool table, pinball machine, decorated walls you can look at for hours, and beer galore, the worst thing to do at a show is wait hours past opening for the headliner. That didn't happen here, it was quite honestly one of the most prompt shows I've ever been to.

Immediately after the openers, Devin came out smiling and goofy as ever. Stocked with his party supplies and a modest entourage, he took the stage and began to perform "Can I" off of his latest LP, Acoustic Levitation. The sound at the venue was crisp, and it complimented his voice really well. He was extremely personable, and watching him dance was one of the most entertaining facets of the evening. He provided a balanced mix of his newest album and his classics. It was a relief to see he didn't run through the new album straight through in attempt to egg on the promo, but I mean the tour was for it so what the heck if he did. He was in touch with his whole set and his DJ, clearly aware of when any cuts and scratches were to take place. It was just a sight to see him kick it like that at his age, and to be so appreciative of a city he doesn't touch down in quite often. If you get the chance to see Devin, I recommend you do so. 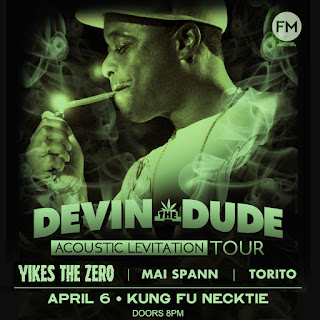