KRS-One - The World is MIND (REVIEW) 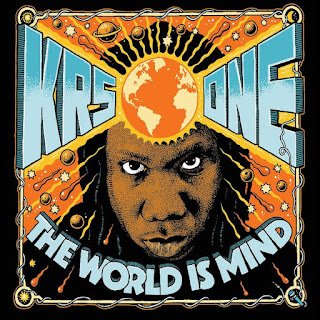 30 year veteran, one of the GOAT that Hip-Hop has to offer, KRS-One, has done it once again and delivered a quality Hip-Hop album. On this review, I only review my favorite tracks, which I have 7 out of 15. I also have 6 other tracks that I like, 1 interlude which I don't really count as a song so it doesn't count for or against the album, and a least favorite track.

KRS demands you respect him and the ancestors on the first track 'Show respect' while also calling out Twitter thugs, and letting you know that you haven't been able to stop him since 1987, and still can't in 2017 and beyond.

On the second track, 'Same shit' The Teacha lets you know that all the evil-doers are the same, just under a different name. He even drops the fact he wrote and recorded this album in a week, he teaches more people than the schools get, and that he's the same as heaven while these wack rappers are the same as hell.

'Out For Fame' is KRS saying he's out for the fame of being a true Hip-Hopper, not the typical get rich quick scheme of today.

Track nine 'You Ain't Got Time' is very politically charged. KRS says 'Politics is a pile of tricks.' and that we got nothing from Obamas presidency but more ignorance and senseless deaths. He reveals he didn't vote in the past election, and that you just don't have time for that bullshit, or bullshit rappers.

'You Like Me' might be my favorite song on the album. The dark vibe is perfect. Here KRS talks about how when he's being completely ignorant, ignorant people like him. On the other hand, when he's talking down on trash 'MC's', talking about uplifting and empowerment, he's too much and a problem.

'Hip-Hop Speaks From Heaven' is saying peace to the fallen soldiers of Hip-Hop throughout the years. It also encourages all of the Hip-Hoppers (especially the black, the youth of the black community) to join in on the true Hip-Hop movement because it's their culture.


Like Scarface, Raekwon, De La, Tribe, Sadat X, etc. The Teacha has proven that the veterans are not washed up, and are often better than most of what the current generation has to offer.