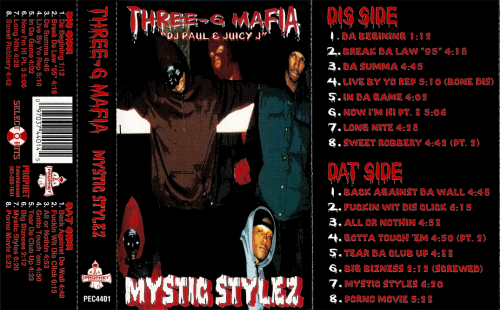 On today's date, May 25th, in 1995, Three 6 Mafia released a pivotal LP recognized as their debut, Mystic Stylez. In the quoted text above (taken from the intro of the remaster release about 6 years later), the spearhead of the clique, DJ Paul, briefs us on some hard facts of the chronology of the project. You can also hear the original without any newer nuances, re-released as two double-sided, candy red, 12" records in a sleeve picturing the original artwork.

Long before Juicy J was flooding airways as a solo feature alongside Katy Perry and Justin Bieber, or before DJ Paul was selling BBQ sauce and real estate, they were the head honchos producing and writing one of the most influential hardcore rap albums ever recorded. This is also long before the world was unfortunate to lose two anchors of the crew, Lord Infamous and Koopsta Knicca, both who had their hands on the classic album. We were also introduced to the entertaining and erratic Crunchy Black, and the promiscuous Gangsta Boo. These six listed artists became what was eventually viewed as the staple roster of Three 6 Mafia, until the disassemblies that occurred years later. 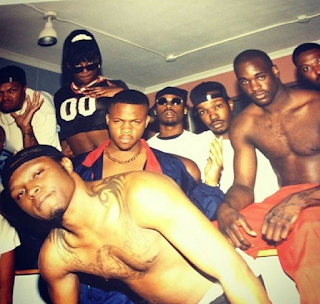 The album can still be traced back as a primary influence of the likes of Raider Klan, A$ap Mob, and really modern day trap and drill music as a whole. The rapid fire drums from Juicy J sound like rounds coming off of an automatic fire arm, and still resemble the breakdowns we often here in contemporary trap and drill. Nearly anybody in the current Broward County/Florida scene that seemed to have exploded over night in the past year or two can be seen as a late offspring of the early Three 6 effort. Same goes for many of the new emcees out of Memphis, Houston, Atlanta, and really anywhere- their legacy doesn't discriminate. Lord Infamous was perfecting what has been somewhat coined as "The Migos Flow" 20+ years ago, and now you can't seem to escape it listening to hip-hop today. The flow can be heard on tracks such as "Now I'm Hi - Part 3," or "Gotta Touch Em' - Part 2". These sounds are done more justice by the Lo-Fi quality pronounced due to the times and their budget. The same sound that has been revitalized partially by artists like Bones, Chris Travis, Xavier Wulf, Smug Mang and more. DJ Paul was looping soul and funk samples throughout the early 90's and brought these skills to light with tracks like "Da Summa," the track that gave the album any sort of initial recognition. Themes of horror core that the group also popularized, being some of the earliest to do so, create lineage to inspiration of artists and clicks like Eminem/D12, Odd Future, and Twiztid. With dark synths, menacing drum tempos, and graphic lyrics, the album manages to be one of the most well rounded projects to contain an overtone of horror. It sounds like there was always a slasher film playing during their studio time, feeding into what they chose to record. They also tried to bring these hardcore elements to life with a Bone Thugs-N-Harmony diss, titled "Live By Yo Rep". Although a standout track and personal favorite, this beef has been since denoted as rather silly, and a misunderstanding, but still shows some bravado from the crew. The project fails to lack in the drug use department, a classic facet of the Mafia's catalogue. Rappers like Pimp C credit them on being the first to talk about doing hard drugs, rather than just selling them. Each song on the record seems to walk into the next, none being out of place. Even if a strong argument might be one supporting DJ Paul, Juicy J, and Lord Infamous as those who put the album on their back, I think a difficult argument to make would be that the album would have been better off without the rest of the group involved. It kicked off what grew to be an extremely interesting chemistry amongst a team of people with outstanding quirks and habits from a place the rest of the hip-hop world knew little about.

The group put Memphis on the map with this album, and it has become more than just a cult classic. It helped them become the posse of posses, a bunch of wild cards, and diverse musicians. They were brave enough to channel their inner horror film buff, exploit their drug use, let women have a hand in their macho group, and push the boundaries of music and entertainment. The 16 track LP was a perfect introduction of what was to come from the clique. From handing out hard copies out of the back of trunks, and failing to reach ears in New York, L.A. and countless locations in between, the group has collectively and individually become a staple to the southern rap scene, and even more so, worldwide.

If you have yet to hear the classic debut, find a way to pick up a copy. It will lead to a whole new array of fascinations. 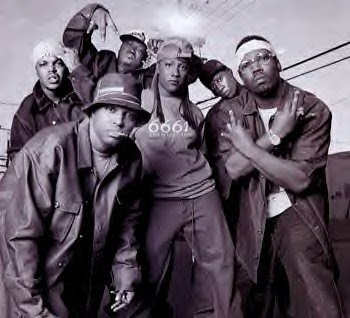 My Thoughts On..
Reactions: