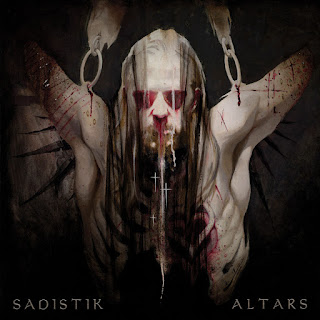 Underground Alternative Hip-Hop artist Sadistik is back with his fourth studio album 'Altars'. Previously hearing his 2015 'Phantom Limbs' collab project with producer Kno, his 2016 'Salo Sessions' EP, and watching an interview he had with 247HH last year about this album, I had an idea of what to expect from this effort. I got what I expected, and more.

The introduction to the album 'VooDoo Dali' is a very dramatic, destructive, and distortion sounding track, which is continued in the next track 'God Complex'. Sadistik had this to say about God Complex, "I am a god because all gods are nothing, which is exactly what I am. That’s essentially the thesis of the song."

'Roaches' is a track where I walked away with mind on these lyrics "Ah hell it never rains, it's all hail. That's heavy rain on everything, no heaven reigns, yet all hail" which is a quote where he really sticks to his promise from the 247HH interview where he said this album is dark and angry, you might get offended, and that he likes dark ideas and things that make people uncomfortable.

"Honeycomb" is nothing short of a banger, which offers way more than you expect from a typical banger, which is what I expect from Sadistik. The water vapor/evaporation vocal effects on the hook was unexpected but welcomed. "My mentality's kill or be, I hide in my honeycomb"

Sadistik gets very personal on "Cotard's Syndrome" where he reflects on the passing of his father and his friend "Mikey" who I have come to learn is referring to rapper "Eyedea" who passed in 2010.

"Salem Witches" is another banger with semi-distorted bass, and a slight horrorcore vibe.

"Sacrifices" is my 2nd favorite track on the album and was originally my favorite. It's such a vibes track to think and close your eyes to while Sadistik tells you to "Sacrifice your Gods, before your Gods sacrifice you"

"Water" ft. Kristoff Krane is a song where both artists express the good and importance of water, like the fact that we're all made of it, and the bad, saying not to drown in it. One of my favorite tracks.

"Molecules" features Terra Lopez and P.O.S. Terra's soulful vocals are perfect, and Sadistik and P.O.S have very down to earth verses about how we're all molecules flowing, drifting in the motion.

"Kaleidoscope" is a track that gives me a "fuck it, let's just die" vibe, since we all are going to. Another one of my favorite tracks.

"Silhouettes" ft. Lige Newton is a perfect outro track, even the outro on the song itself was perfect with Lige's vocals.

The second half kicked the first half's ass on the album, but that's not to say the first had nothing going for it and didn't pave the way for the second to mesh so well. This was dark, depressing, real, controversial, personal, angry, wanted, and needed.

Watch my Video Review on YouTube for a more informative and Raw review. Check the description as well for a link to a part of the 247HH interview I mentioned. Thanks for reading!