A. Rob Interviewed by Dynamic JAB 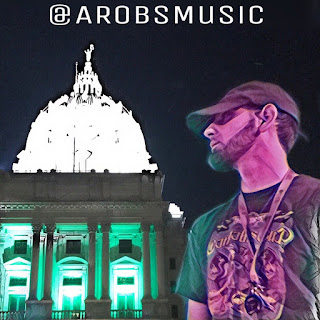 Peace to the OK-Tho! community. Today I bring you an interview with PA MC "A. Rob". A. Rob is set to be featured on my upcoming mixtape "404 Not Found" which drops on Friday, June 23rd.
A.Rob (@ARobsMusic) Soundcloud.com/ameen-rahman

How'd you get your foot in the door as an artist? Any particular artist, album, song or person?

Cassidy really got my mental gears turning. I was probably twelve or thirteen years old when I really became infatuated with the way rhymes, similes and metaphors could all gather up for an impressive punch line. That's how I learned how to rap. It was the punch line bar for bar style for me until I hard "The Cool" by Lupe Fiasco. That changed everything. I started mixing what I got from Cassidy with the intelligent consciousness and storytelling of Lupe, and that was that. To this day those are my two biggest influences.

I think I'm still kind of knocking on the door. Sometimes it cracks open and someone important peeks out and gives me a, "good work" or, "keep it up". A couple more times of that happening and I'll really have my foot in the door. Networking, meeting new people and spreading the word about my music has led me to good opportunities, and I know with consistency the opportunities will continue to grow and so will I as an artist.

What kind of MC are you?

I am a Palestinian-American, Lyrical, conscious, but still fun MC. I can have a crowd in tears or jumping up and down. I can give you your favorite part song and favorite conscious song on the same project. I'm really every kind of MC mixed into one.

My favorite Rappers out right now are "Chance The Rapper", "Noname", "Mick Jenkins" and "Smino". They have all influenced my sound for sure. I also listen to a lot of other genres. I love alternative rock. "Twenty One Pilots", "Catfish and the Bottlemen" and "OK GO" have influenced my style just as much as any Hip Hop artist.

How's the Hip-Hop scene in your city?

I'm from Harrisburg, PA. A small city with a quiet Hip Hop scene. Most people who rap from my city are on the same shit. Hood music, talking about the same damn thing as everyone else, with similar flow and beat choice. It doesn't excite me. As far as producers though, there are a few guys I really like from my area and will be working with diligently. I recently moved to Philly to try to escape the Harrisburg scene actually. Out here there are a million different genres blended into the Hip Hop scenes core. I've already met more dope artists than I know in my hometown, and I guess that speaks for itself.

Hip-Hop is so over-saturated with the same type of music. It's heavily off balance and unevenly meshed. Plain and simple, I think true lyricists and storytellers need to overthrow all the nonsense and restore the balance.

Do you feel "mumble rap" should have its own category like trap and other sub-genres do?

"Mumble Rap", if we want to call it that, should definitely have it's own category. It just doesn't really fit with the idea of Hip Hop, which is all based off of words and lyrics. Whenever I ask someone what they like about a certain "Mumble Rap" song, the answer always revolves around two things, the melody and the beat. There was a time, as J Cole once said, "back when you could get a platinum plaque without no melody". I think those times are completely gone forever so I get it. People are adjusting to the times with the melodic beats and vocals that stick, I totally understand. I just personally don't like it because I'm a fan of lyricism, so would I want my music to be in the same category as Mumble Rap, no.

How do you feel about how alive the blending of different sounds in Hip-Hop is? From rock/metal infused, R&B infused, pop, etc. It could all fall under the alternative, experimental, and industrial labels.

I love the blending of genres into Hip Hop. It makes it so much more interesting. It's not ruining a thing, just enhancing and helping things grow. All of the Alternative Rock, EDM, Dancehall, R&B, Funk or any other genre I may listen to will do nothing but help Hip Hop grow and progress.

Do you have friends and family that support what you do?

My family and friends definitely support what I do, but from a distance, unfortunately none of them are hands on in helping me achieve my musical goals. My mom wants me to use my degree, and my Dad just assumes he knows things about the music industry and so he gives me outlandish advice. Some of my friends play my music a lot, some don't know I released a new song until I personally tell them. Either way, I still appreciate the support they all give me.

Do you feel there's still a color barrier in Hip-Hop? How do you feel about Lord Jamar's white rappers comments from a few years back?

I honestly never heard of Lord Jamar until right now. Glad I looked it up though, he's got some intelligent points. I do think it's important to know the true originators and legends of Hip Hop and where it all came from. And yes, the true originators were all black. Moving forward though I think no matter what your ethnicity, If you respect the culture and make dope music it should stand for itself and there should be nothing wrong with idolizing white, or any other raced rappers.  There will always be a color barrier in Hip Hop just as there will be everywhere else, but I believe talent and passion should be looked at first.

What can we expect in the future as far music? Solo album, collab, feature? If anything, would they be released in 2017?

So much good music will be coming from me in 2017. I already released 3 singles on all major platforms, "#Goals", "Reporting Live" and " U Got Me" (Search A.Rob) The singles will keep piling in and will be followed up by a 6 track EP by a young producer from Harrisburg and me. It's a super dope project with totally different feels for each track. This will be followed by another EP which is a collaboration by a Producer/Singer from West Chester and me. Both projects will be available on all major streaming platforms. I am definitely hype to get these out, everyone's going to love it.