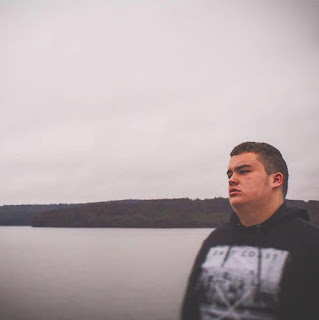 Earlier this year I was fortunate enough to come across upstate NY MC "Big Mike" and his music. I reviewed his album "State of Mind" because I was blown away by it. Mike is set to be featured on my upcoming third dj mixtape "404 Not Found", which drops this Friday, June 23rd. I'm even more fortunate now to be able to bring the OK-Tho! community a pretty chill but in-depth interview with the young up and coming talent!

What kind of space were you in when creating "State of Mind"?

- When I created the album I was motivated like never before. I had just recently got a sponsorship and I was finally getting the opportunity to record in a professional studio.

How'd you get into Hip-Hop? Any particular artist/person, or album? How'd you get your foot in the door as an artist?

- Growing up I battled with a lot of depression and anxiety. I went through months of counseling and about ten different medications just to find out that music was the only way to make myself feel sane. At my lowest, I was introduced to a artist that goes by the name of Logic. He's inspired me in ways that I can't explain and I don't think I would still be here without the positive message he portrays in his music!

Do you feel there's still a color barrier in Hip-Hop? If you heard them, how do you feel about Lord Jamar's white rappers comments from a few years back?

- Growing up in a small town in Upstate NY and going to a school in which 95% of people are white, I believe that there is still a color barrier in today's Hip-Hop. I was hated on constantly for being different, but I stuck with it and look where we are today. As far as Lord Jamar's comment, I could care less. Everybody is entitled to their own opinion. Either way I'm going to continue to work as hard as I can and block out all the hate and negativity.

You and I have talked about our tastes in music before, how do you feel about how alive the blending of different sounds in Hip-Hop is? From rock/metal infused, R&B infused, pop, etc. And do you feel "mumble rap" should have its own category like trap and other sub-genres do? Should it even be called Hip-Hop, or should it be thrown into the mainstream "rap" category?

- I grew up on a mixture of Ozzie and a lot of classic rock. Even though I make specifically rap music, I'm a HUGE fan of all genres! I don't really have much to say about trap and mumble rap because that's not style of music I'm educated on. I love to listen to music I can relate to and get inspired by.

How do you feel about the current state of Hip-Hop? Do you feel there's a fair mesh of underground and mainstream?

How's the Hip-Hop scene in your city? Is there one besides you?

- The Hip-Hop scene in my city is decent. There are only a handful of artists that I feel can compete at a high level, but I respect everybody who is on their grind.

What can we expect in the future as far as projects? Solo album, collab album, features? If anything, would they be released in 2017?

- I'm currently working on two HUGE projects. I'm not going to speak on the release date or the features, but I encourage you all to not sleep on me. Be ready.

Great. Thank you for taking the time converse bro. Anything you want to say or anybody you want to shout out?

- I want to give a huge shoutout to the loyal fans for supporting me through thick and thin. And anybody still hating on me, fuck you.

I like the attitude. That's what it is, we're out.