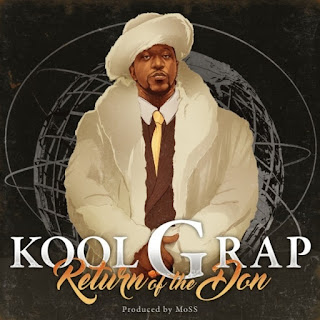 Kool G Rap, one of the most influential pioneers in Hip-Hop history, has returned once again with his fifth studio album, Return of the Don. This is the OG's first album in 6 years. With 11 tracks to offer, G Rap showcases how on his game he still is.

(I do not review all tracks)

On the title track "Return of the Don", G Rap is simply saying that play time is over.

Track two "Mack Lean" ft. Fred the Godson and AG Da Coroner, has a hook that is too addicting. I really felt Godson when he said (to no one in particular) "You been on for  couple, don't diss the fore fathers."

The fourth track "Wise guys" ft. Lil Fame and Freeway, is a track I was actually listening to while typing this review up, because it's so easy to vibe, work and roll to.

"Out for that Life" ft. Raekwon is where both MC's depict the fruits of labor and lifestyles that they and similar artists enjoy, and they both make it clear that they're both still out for it.

"Capitol Hill" ft. Manolo Rose, Sheek Louch, and Cormega, is the perspective of those who live or lived in the wild, jungle-like streets. While life is beautiful on Capitol Hill, it gets pretty ugly.

"Running" ft. Termanology and Saigon is where all MC's bask in their longevity. Term gets the most personal, while G and Saigon stick to calling out bullshit rappers.

The last track I want to speak on is "World is Mine" ft. KXNG Crooked, Willie the Kid, and Pearl Gates. Crook tells some of his story of rag to riches, while managing to also keep in touch and pave the way for the core subject of this song, living life to the fullest.


With these 11 tracks, G Rap showcases how on his game he still is.