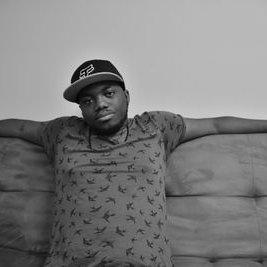 Peace and love to the OK-Tho! Community. Today I have the pleasure of bringing you all an interview with a man who's been a homie of mine for well over a year now, the producer emcee himself out of Orlando Florida, Ricky Atoms. I featured Ricky on my spring/summer 2016 mixtape "As We Thrive" and on my fall 2016 EP "XtENsiON(EP)". Enjoy reading our discussion on his thoughts on the current state of Hip-Hop, Hip-Hop in his city, his introduction to the culture, his influences, the Lo-Fi sound, and more!

How's the Hip-Hop scene in your city?

Ricky: Well right now, I see a lot of more lyrical cats coming out of nowhere. But it's a lot like other places where that trap-punk type wave is going on.

What was your introduction to Hip-Hop? Any particular album/song, person or artist?

Ricky: I was pretty much under a rock in my own world when it came to music until an old friend of mine named Travis started letting me hold his ipod in high school and put me on to Talib Kweli, Mos Def, Jean Grae and various other artists.

Ricky: Well, as far as my foot being in the door I don't feel I'm quite there per say but I'm definitely on track to becoming the artist I want to be.

Who are your favorite producers out right now? Do you feel any of them have an influence on your sound?

Ricky: Dilla, Black Milk, Karriem Riggins, MF DOOM, MADLIB, 9thWonder. Yes, I feel all of them have influenced me in some form or fashion. I ask myself what would they do to this sample or how they would layer drums, etc. I try to apply a little of my influences styles into my own little beat gumbo lol.

How do you feel about how alive the blending of different sounds is in Hip-Hop? From rock/metal infused, R&B infused, pop, etc. It could all fall under the sub-genres of industrial, experimental, alternative, etc.

Ricky: Not much to say about it to be honest. I understand that it is part of the growth of the culture to take from anywhere and make it "Hip-Hop". We have been doing that for as long as hip-hop has been around, but how it's done could determine how to categorize what you do with what you have I guess.

You told me a while back that you started making Lo-Fi before it was a thing. Why did you stop? Do you feel you'd be even more progressed in your career if you had stuck with it? And how do you feel about how where it is now and how it fits in the Hip-Hop scene?

Ricky: To be honest it's very crazy to think I was doing those type of beats and when I stopped a whole wave of producers popped from a style I had already stop doing. I mean I was getting thousands of plays from those beats, but at the time I was making those I wasn't thinking make lo-fi beats. I was trying to figure out how to do it like Hi-Tek, 9th Wonder and Dilla. I wanted to achieve a cleaner sound. I mean I was on soundcloud before it blew up. I guess that's how I got so much love around that time.

I think if I stayed with the lo-fi sound there is no telling where I would be in that realm of hip-hop, but I know I would be a complete monster with the lo-fi skills lol. But It's pretty dope that lo-fi beats are a thing now. I'm cool with it, it's some crazy talent in the Lo-fi realm nowadays. Like these producers are nasty with it and I just be like "that go so hard" and I bump them joints lol.

Ricky: To be honest I feel like there is not a fair balance in Hip Hop, The radio is too saturated with microwave music, like come on y'all we need some type of substance. But I understand it's more of a business then the art itself and in with us living in times where we need instant gratification, Hot Pockets sell. Hell even I like hot pockets, though that's not my primary eating choice. Feel me?

Do you feel mumble rap should have its own sub-genre label like trap and others do? Should it even be called Hip-Hop, or should it be thrown into the mainstream "rap" category?

Ricky: OH MAN! I swear I think about this question all the time. I think mumble rap should just be labeled as "Mumble Rap" or something else. Definitely a sub genre of Rap and not leaned so much on the label "Hip-Hop" because KRS-ONE said Hip is the knowledge and Hop is the movement. And even that small quote is a testament to what Hip Hop is in its truest form.

What can we expect in the future as far as music? Solo album, collab album, collab feature? If anything, would it be released in 2017?

Ricky: As for future projects, I have something I'm quietly putting together. As far as collabs, there aren't many artist that are coming up that wants to collab. Be it ego or just not wanting others to outshine them. I don't know but I don't get responses from who I reach out to for now. So I'm just working on my music in my sector of the world lol.

Great. Thank you for taking the time to converse brother. Anything you want to say or anybody you want to shout out?

Ricky:  I want to thank you for the opportunity to do this interview with you man, You're cool people and, I want to shout out my crew and family. Peace Love and Prosperity. Stay Up Yo!

There it is. Peace, and on that note, we're out.