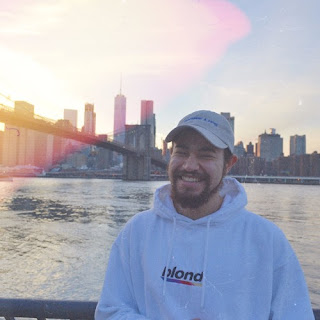 Through my long-time brother Zen Gnarly and his first mixtape 'Golden', I came across the talented NY producer TGDJ. I've reviewed his two albums of his, "Summer's Over (20$6)" and "[The Color & Sound.]" which are admirable projects. Now I'm bringing some insight on him to the OK-Tho! community to help make more listeners aware of his special talent, and his drive. TGDJ is also gonna be featured on my newest mixtape "404 Not Found" which drops Friday, June 23rd.

-I remember around 8th grade I was at my peak obbsession with acts like the Foo Fighters, Nirvana, Weezer, Queens of the Stone Age, Guns & Roses and the Arctic Monkeys. After I had began to get out of my confort zone musically, I exposed myself to more electronic oriented acts, most specifically Daft Punk. It was around the middle of my Freshman year of high school, I spent alot of my free time on youtube watching music videos (something I still do to this day), one day, I stumble apon the music video for Daft Punk's "Harder Better Faster Stronger". It was at this moment my next accidental obbsesion began. Under the related songs I found a little song called "Stronger" by none other than Kanye West. After hearing how he encorporated Daft Punk's track into his track, along with the irresitible anthemic groove, I was instantly hooked. The next weekend I went to my public library, which allowed you to rent out CD's, and went home with literally every Kanye album up to that date (I think it was up to MBDTF). I then began to obsessivley replay his songs on my IPod nano, just in awe that one person could do so much dope shit. It wasn't utill I got to MBDTF that I really began to appreciate, and just be overwhelmed with how much his music connected with me. Now up to this point, Kanye was the only person in Hip-Hop I was listening to. Being the curious fan I was, I began researching on how MBDTF was created and began to go back in hip hop history, listening to people who influenced Kanye. From there my true door into hip-hop opened, I discovered seminal hip hop acts such as Tribe Called Quest, Wu-Tang, Jay-Z, and eventually the what I consider as a album that helped shape my sound as a producer initially, The Main Ingredient - Pete Rock & CL Smooth.

-To be honest it all kind of happened naturally, when I was younger I used to play piano and throughout middle school and the first year of high school I was in concert band, on saxophone. After recognizing that my attitude towards music didn't really mesh well with my band teachers', I left band and began experimenting with music production, and taught myself how to play guitar. One day a group by the name of West Egg popped up in my twitter mentions asking me to give their music video a listen, this was the first time this happened to me, so I figured what the hell. To my surprise I actually really enjoyed their music. One of the artist's from that group, Gats (whos real name is Rob), put out a solo project soon after I discovered the group. Impressed that some random person from Tampa, Florida could rap and produce to this caliber on such a low budget really inspired me to start focusing more on my production. Once I had made a track I thought was cohesive enough to share to the public, I went to Rob seeking critique. The first beat I sent him he wasn't a big fan of, but it was my second, first sampled beat which really caught his ear. I remember not thinking much of it when I sent it to him the beat, which would later land me my first placement on his 2nd project Redtape. From there I linked up with the rest of his crew, James Diotic, Rc, and some more. One of my closer relationships was formed with James Diotic (aka Diego) thru who I eventually was exposed to Zen Gnarly (aka Gio), Erik Dom, and Lance. From then I kept in touch with all of them, growing my network, as well as helping them when I could via production.

3.) Who are your favorite producers out? Do you feel any of them influence your sound?

-Well if you asked me when I started I'd say Kanye, Pete Rock, and Gats. But over time, Ive been exposed to new music and my music began to reflect that exposure. Along with those previously stated, I've been influenced by people like Q-Tip, 9th Wonder, Dj Shadow, RJD2, Damu The Fudgemunk, Noah Shebib 40, Knxwledge, Toro y Moi, Lapalux, and Iman Omari.

4.) How do you feel about how alive the blending of different sounds in Hip-Hop? From rock/metal infused, R&B infused, pop, etc. It could all fall under of the sub-genres experimental, alternative, industrial, etc.

-I think that all music is inspired but what came before in some fashion, regardless of genre, that being said, I think sub genres are a great way to distinct sounds and their orgins
5.)  Do you feel "mumble rap" should have its own category like trap and other sub-genres do? Should it even be called Hip-Hop? Or should it be thrown in the "Rap" category?

-Like I said before, all music is inspired but what came before in some fashion, I don't understand why people use the term mumble rap so much, for the most part to me  what people consider mumble rap just seems like a sub genre of the ever expanding trap genre.

6.) How do you feel about the current state of Hip-Hop? Is there a fair mesh of commercial and underground?

-Due to the popularity and accessibility of new music via the internet, there little to nothing that stands in the way of you finding music that best suits your tastes. That being said, yes, there seems to be a good balance of underground and commercial hip-hop music or music in general. In some cases it just takes more digging than others.

7.) Do you feel there is still a color barrier in Hip-Hop? How do you feel about Lord Jamar's white rappers comments from a few years back?

-Well I guess it depends on your perspecitve, there are some notable white rappers who have garnerd succsess in the mainstream, and underground.

-When I came up with the name in 8th grade it was an acronym for The Gentleman Disc Jockey, but at this point I've pretty much abandoned the meaning of the acronym and just went with TGDJ, so to answer your question, it can mean what ever you want it to mean.

9.) What kind of space/setting are you in or do you need when in creation mode?

-My ideal physical setting is my laptop, hooked up to my cerwin vega studio monitors, midi keyboard, and a view of the outside world. Mentally I do best after drinking some tea, smoking weed or listening to something which inspires me to create.

10.) What can we expect in the future as far as projects? Solo album, collab album, prod. feature, if anything, would they be released in 2017?

-Well I just put out my first set of remixes under the ep title <d o p e_>, experimenting with a more lo-fi type sound. I have a ep coming in a similar vein but with artist i've colaborated with in the past, and I might do another remix ep before the year's over, if I have enough material I feel comfortable putting out by then. Also s/o to James Diotic (Deigo)...we got something special (if he ever decides to finish his shit).