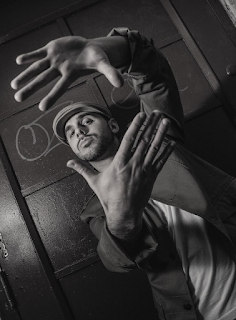 1.      What kind of space were you in when you in the process of your last project "shadows in the night"?

I was in a very good creative space during the actual writing and recording phase of Shadows In The Night. The concept for the overall project, topics/themes for each individual song, structuring of the tracklist, everything just seemed to come to me very naturally during that 5-6 month stretch. Outside of the music, mentally, physically, and spiritually, I was feeling the best I had in years. For about 2-3 years prior to creating that project, I was in a much darker place, dealing with my own personal battles as well as those of my close friends and family. I appreciate that time period though because it probably laid the foundation for the project I eventually ended up creating.

2.      How'd you get into Hip-Hop? Any particular artist/person? Particular album?

I didn’t really buy CDs much as a kid, so most of my music intake was from watching shows like Yo! MTV Raps and Rap City. I remember sitting in front of the TV, waiting to go to the bathroom because I didn’t want to miss my favorite song out at that time. Now, we can just pull up YouTube and watch any music video we want, but I feel like having to patiently wait for them to play your favorite video back then made it all the more special. Once I actually got my hands on physical CDs a few years later, some of the albums that really had an impact on me were: Doe Or Die (AZ), Illadelph Halflife (The Roots), and The Miseducation of Lauryn Hill.

I first started writing rhymes back in high school just as a way to pass time in class. Once I got to college, my writing naturally improved, and I started to take it a little more seriously. I would perform at some open mic events and talent shows on campus. In my senior year, I linked up with a friend and put out a concept project entitled The Blind Voice. People who knew me seemed to enjoy it and a few blogs even posted it, which was definitely a cool feeling. I went a few years without releasing any material before I finally put out my first solo project, Shadows In The Night, which received even more attention from blogs and independent radio stations. A person who I’ve never met before said that it was my project that made them like hip hop music. I’ve also received a few messages from people telling me how much a particular song helped them through a difficult point in life. I never expect to hear those things, but having that impact on even one person is significant to me.

I do. I’m very blessed to have a loving, very supportive family and group of friends.


5.      How do you feel about the newer talent coming out of Chicago right now? Like Chance, Saba, Odd Couple, Vic Mensa, Mick Jenkins, Montana of 300, Noname, etc.?

These guys are doing some great things. Just listening to the music, you can tell they’re actually taking the time to formulate ideas and craft verses. I appreciate anyone who puts real thought and time into whatever it is they are creating.

6.      Being from Chicago I have to ask you this, With Kanye, Common, Da Brat, Do or Die, Twista, Lupe, Rhymefest, No ID, and etc. being from the area, what to you is Chicago's place is in Hip-Hop?

Just in the names you listed, you can see the amount of diversity when it comes to different sounds and styles. Geographically, I suppose it makes sense. You look at the largest metropolitan cities across the country such as New York, LA, Chicago, Dallas, Houston, DC, Philly, Miami, Atlanta. Every one of those cities with the exception of Chicago is either in the East, West, or South where the sounds may be a little more defined. Regardless of what is playing on the mainstream level, there is a
great deal of diversity in Chicago hip hop music, and really, art in general. It’s definitely a creative place.

I have a few loose project ideas I’m working on simultaneously, but not sure which one I will ultimately move forward with next. I tend to operate outside the construct of time when it comes to making music, which may be why my releases aren’t as frequent as other artists. I like to do research, allow life to happen, and gain new experiences that eventually lead to inspiration for a strong, conceptual project. I wouldn’t be satisfied putting out a disjointed project, but I may put out a few isolated tracks this year to help bridge that gap.

8.      Do you feel there's still a color barrier in Hip-Hop? (If you heard them) How do you feel about Lord Jamar's white rappers comments from a few years back?

I absolutely agree with Jamar that white rappers are guests in hip hop. When you go back to the 70s, Kool Herc and Coke La Rock provided the basic template for what hip hop shows would grow to become. You had DJs in the early 70s like Pete DJ Jones and Grand Master Flowers who brought the party to the parks in their respective boroughs. Even beyond that, you had people like Gil Scott-Heron, George Clinton, James Brown, even H. Rap Brown who delivered his speeches in a rhythmic, poetic style. All of these people influenced what we know as rap today. It was founded by Black people, but white people were always welcomed as guests.

9.      You and I have talked about our tastes in music before. How do you feel about how a live blending of different sounds in Hip-Hop is? From rock/metal infused, R&B infused, pop, etc. It could all fall under the sub-genres of experimental, alternative, industrial, etc. And do you feel 'mumble rap' should have its own category like trap and others do. Should it even be called Hip-Hop, or thrown in the (mainstream) 'Rap' category.

I already feel like “mumble rap” is an unofficial sub-genre. It’s not something I listen to, so I couldn’t even tell you if the people that make that kind of music have another name for it. The only time I’m bothered by this is when people outside of the hip hop community listen to “mumble rap” and assume that every rapper or hip hop artist is exactly like that. The issue is the lack of variety in the mainstream more than anything. Back in the day, you could have Kid ‘N Play, Public Enemy, A Tribe Called Quest, and LL Cool J all on the radio at the same time. People within the hip hop community know that there’s a huge difference in styles between Lil Yachty and Black Thought.

10.  Any advice to aspiring artists? And for that how'd you get your foot in the door question, do you live off your music?

I’m currently unable to live off my music and have to work a regular job, so I can’t really offer the greatest advice in that regard. As general advice though, I would say to just stay true to yourself. It’s very easy to compare yourself to other people, especially those in the same field you work or perform in, but your path is not going to look the same as the person you’re trying to imitate or follow. Everyone is going to have their own struggles, successes, and unique undulations along the way. There’s no person in the world that can be a better version of you than yourself. Embrace your uniqueness, perfect your own style, and become the best version of yourself possible. That’s with anything, not just music.

Great. Thank you for taking the time to do converse brother. Anything you want to say or anybody you want to shout out?

I just want to give a big thank you to everyone​ who has taken the time to listen to Shadows In The Night. I want to give a special shout out to Add-2, Domi, Sohjé, Albert, and James who all helped make this project possible. Finally, I want fans to realize just how important they are to me and unsigned artists in general. I don't have a label or marketing team behind me, so whenever somebody shares my music with another person, it truly does help. I think there's great power in word of mouth and grassroots movements. No voice is too small to make a difference. For those interested, you can stream/download my project at the following link: