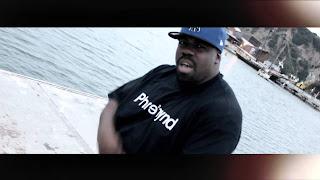 I came across California based MC 'Whidbee' a year and a half ago after hearing his music played by the Legendary STAR (Troi Torain) on his evening radio show "Live and Direct" on YouTube. In that time I've chopped and screwed some of his music and even featured on my first mixtape "#WePutOurSELFOn" back in December of 2015. Now I've had the pleasure of getting to know him a little better by conversing with him on numerous subjects from his introduction to Hip-Hop, how he got started and progressed to where he is now, future music, and more! Read our one-on-one below and enjoy,

I actually got started in Hip Hop following my brother, he used to record his music and I would freestyle. One day he took me to the studio and told me to spit a verse to one of his songs, however I did not take the opportunity serious. I thought I could just freestyle my way through the song, biggest mistake I learned when recording music.

I actually got my foot in the door freestyling over other artist beats, once I gain a fan base I started putting out original music.


3.) How do you feel about how alive the blending of different sounds in Hip-Hop is? From rock/metal infused, R&B infused, pop, etc. It could all fall under the sub-genres of experimental, alternative, industrial, etc. And you do you feel 'mumble rap' should have it's own category as a sub-genre of Hip-Hop like trap and other styles do. Should it even be called Hip-Hop, or should in be thrown in the mainstream "Rap" category?

In my opinion, blending music takes away from what Hip Hop is. If you're going to create a new genre of music, call it something else. Don't water down the original product to get a cheaper substitute. R&B is basically dead ever since the singers wanted to become rappers and rappers started singing. If a rapper starts to play instruments then that is totally different from just programming a beat digitally. That since of pride comes into play because you are on an entire different level from the other rappers.

Mumble rap and Trap music are just names people gave to a certain sound. If you look back, there were artist you couldn't understand and other artist who talked about the hood and selling drugs, no difference.  The difference between mumble rap and rap is you couldn't understand is the simple fact that back then you would print out lyrics and learn them, and be astonished by what this artist said. Now people are lost in the beat so mumble rappers get a way with a lot of nonsense.

In California the Hip Hop scene is striving up north in LA and Oakland, however in San Diego it's not too much. If you want to make it out in San Diego you have to branch outside the city.


5.) Who are your favorite artists out? Do you feel any of them influence your sound?

My favorite artists out right now are DMX, Cam'ron, Jay Z, Kanye, Dave East, T.I.P, Jeezy, and Nipsey Hussle. I would say if you listen closely to my music you can find some similarities.

I have been considered a conscious street rapper that can mash well with pop and edm music.

7.) How do you feel about the current state of Hip-Hop? Is there a fair mesh of underground and mainstream?

The current state of music is currently in a transition period in my opinion. Lyrics are starting to matter once again which is really important in the world of Hip Hop. The current state allows people to live lies. What I mean by this is, what happened to the struggle we call life? Why is it that the entire world is partying? What, nobody has problems anymore? A lot of what rappers talk about is doing drugs, sex, and designer stuff. In this era and it's accepted.

The current state of music is also unfair in the sense that you have to have a gimmick to make it, however this gives independent underground rappers a chance to learn the game digitally and figure things out while waiting for a door to open up.

8.) What can we expect in the future as far as projects? Any collabs, solo projects, features? Would they be released in 2017?

I just dropped "Coo World" which is available on all music platforms, I will be releasing a new mixtape this fall and another one in the winter. I've also published my first book titled By my lonely available at all major book retailers.


Well thank you Sir. After knowing you and working with you for a while now, it was good to add this to our list of accomplishments together. Anything you want to say, or anybody you want to shout out?

First, thank you for having me on your platform and respect. I want to speak to the independent artist out there that might feel like the ups and downs that comes with this game might feel like a waste of time. Remember this is a business and in business its about endurance and profit. You need to be able to keep going when you feel like quitting, eventually the profit will come in due time if people believe in you. So, keep working, perfect your craft, learn from every mistake and never doubt yourself.