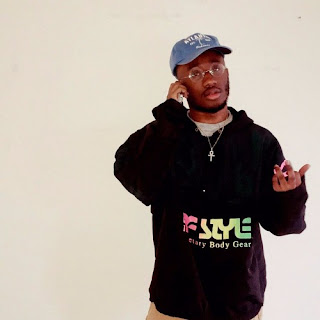 I have known and worked with the Lebanon PA artist Zen Gnarly for almost two and a half years now. Now we've taken the time to converse and speak on his upcoming album, the current state of Hip-Hop, his alias, and more.

1.) So you got a new album dropping, what kind of space were you in creating this? Can we expect anything completely left from what you've done in the past?

The mindset or creative space I was in is a recovery from my very first psychosis. This album isn't entirely different, just a bit more in depth of who I am. Each track on the album describes you or paints a picture of what it's like living being schizoaffective so things are very distorted and far fetched.

2.) How'd you get into Hip-Hop? Any particular artist/person? Particular album?

- I was very much interested into Hip-Hop at a very young age . I grew up listening to Jay-Z I also was exposed to the earliest age when every song had that "DJ Clue" or "Desert Storm" DJ tag in their music.

- George Bait who was my mentor at a time brought me out to Maryland where I was given a taste of a different market of artists and also services to advance myself as an artist. It was there where I first shot my very first music video "Wssup" Since then I've been locking in with different people expanding my sound.

4.) How do you feel about how alive blending of different sounds in Hip-Hop is? From rock/metal infused, R&B infused, pop, etc. It could all fall under the sub-genres of experimental, alternative, industrial, etc. And do you feel 'mumble rap' should have it's own category like trap and others do. Should it even be called Hip-Hop, or thrown in the (mainstream) 'Rap' category?

- I feel like what we're witnessing in Hip-Hop is another Big Bang, a form of many evolutions merging different sounds to create different sounds and genres. We look at rock as something separate from hip hop but it's been existing here with us for a long time. As far as mumble rap, I don't think it should have its own genre nor should we call it just that I think we should embrace it as Hip-Hop. When I hear Uzi or Carti blatantly shouting in their Adlibs it reminds me of James Brown .

5.) How's the Hip-Hop scene in your city? Is there one at all besides you?

- I'm unaware of The Hip-Hop scene in Lebanon PA . I know there's a few other artists that I like very much such as First Class Waves and Markush that are making their own noise but as far as the others I don't really go out of my way to look for them.

6.) Who are your favorite artists out? Do you think any of them influence your sound?

- Favorite artists right now would be Zen Gnarly, Zenny, and Zenny the futurist for right now. I just started listening to music again and without being passive with it but I wouldn't say anyone has any influences over my sound since I've been in a hiatus just creating.

- What Zen Gnarly means to me is two different realities merged together one being of peace the other being radical. Yin&Yang

- I don't consider myself a MC, I'm a futurist, a jack of all trades. But if I was a type of MC I say I would be a wizard type of MC casting spells with words, opening portals.

9.) Do you have family and friends that support what you do? Have you had to let any body go in pursuit of your career?

- A lot of my close homies and musician friends support my music to the max. Some of my family members know what I do but don't really see the big picture yet. I had to let go of relationships and certain flings that weren't healthy and were eventually gonna block my path to success.

- My new album is called 333Dimensions


Great. Thank you for taking the time to converse brother. Anything you want to say or anybody you want to shout out?

Eagleville hospital, George Bait, TGDJ, Erik Dom, James Diotic, Markiz Rey, Hustle Firms Studio, Ra Digga. And I wanna say and ask one thing. What the fuck is a smart phone nigga? Oh shout out Shenny, Butch Dawson, Baeside, Hurtboii. Those were the producers behind it.