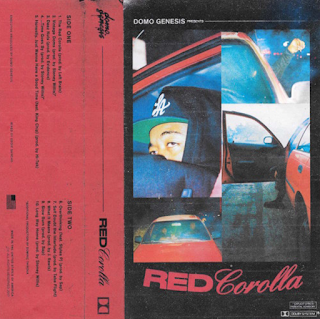 Domo Genesis strikes back with a 10-track tape, Red Corolla. The seasoned Odd Future emcee is known for running circles around beats, twisting words together to make you think, and killing solo and guest spots. He may very well be the most consistent member of the collective if you look at the course of their run. This tape is no exception to his reputation. He brings that track number two to the table, "Vintage Doms". Hearing him let loose on the banging Left Brain instrumental on the opener was refreshing and nostalgic to a degree. Aside from Left Brain we hear production from the likes of Hi-Tek, Evidence, J Rawls, Stoney Willis, Sap, and Take Flight- pretty good company. The first couple of tracks have a sort of stoned, stay in the studio all night to chew up these instrumentals feeling, in which there really is not a bad verse in sight. Then on the Hi-Tek produced, "Honestly, Just Wanna Have a Good Time," he recruits Clevelander, King Chip, and the two have some fun on the jazzy, feel good cut. On "Overthinking," he teams up with Styles P for what sounds like could have been left on the cutting room floor from an old D-Block tape, a good track though. Overall, Doms doesn't stray too far from his bread and butter. It's nothing that is going to become a nationwide, summer time anthem, nor is it meant to be. More so sounds like he had something to get off of his chest. It does it's job while still reminding us what Doms is all about. He is really nothing to sleep on. If your niche is tight delivery, rhymes and references that pick your brain, funky, experimental production still centered around clean 16's, then this tape may very well be for you.