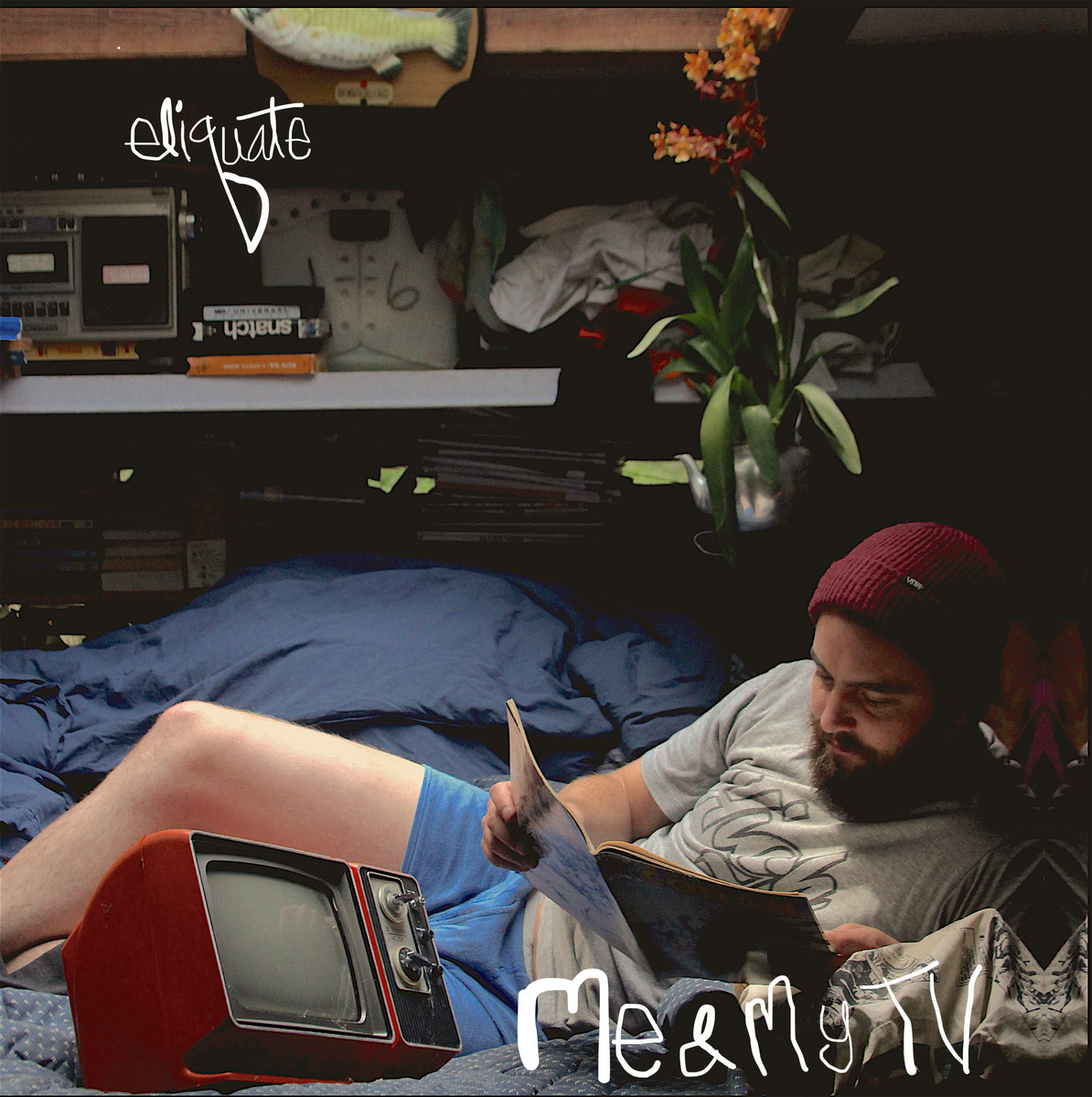 “9:14 AM, on a Wednesday, Philadelphia, PA.  ‘So what if I didn’t go to college?  John McClane didn’t go to college, he defeats the bad guys using street smarts.’” I’ve seen this episode of It’s Always Sunny (s9e8, “Flowers for Charlie”) several dozen times, as is true for every episode that stitches together the quilt of Charlie and co.’s odd and inexplicably endearing universe. There’s no thought left in watching this show for me; I know every line in every scene, I know every hole in every plot line, I leave It’s Always Sunny running almost every night when I fall asleep because it’s mindless and comfortable and there aren’t any surprises. “‘You see, I just realized I have two ears, so it’s a waste to listen to only one thing.’” It’s running on silent now, on the T.V. in my living room, with the English subtitles flying by and Eliquate’s new album, Me & MY T.V. playing in the foreground. I don’t expect to find any synchronicity in the stories or characters here, I get the feeling that Eliquate’s lead vocalist/songwriter/philosopher Elliot Wright doesn’t watch the same shows that most people watch. All I’m hoping to capture in the comfort of my favorite T.V. show is whatever feeling ripped this album from Eliquate’s charmingly disturbed psychology, whatever experience Elliot had in the morning hours when this project was born. Maybe I’m chasing a hint of madness.

In the decade or so that Eliquate has been making music, the Santa Cruz, California based project’s sound has been impossible to categorize. Part of that’s due to constant evolution: in the seven years since their first project dropped, Eliquate has consistently grown artistically and pushed the boundaries of their sound along the way. On Me and My T.V. Elliot packages all of that experimentation and genre defying sonic exploration into a solo project that offers the veteran songwriter’s most well rounded, lyrically interesting, and all around profound work to date.

If you love Aesop Rock, you’ll love the dense, clever social commentary on “Ray Bradbury,” and recognize some classic hip-hop roots in the ways Elliot flexes his flow and dances around the beat. If you’re a fan of indie rock inspired melodies, you’ll be enthralled by the circling crescendos and emotive delivery on the powerful “David Cronenberg,” which pays sonic tribute to early Arcade Fire and classic Arctic Monkeys in its tightly produced bedroom rock simplicity. You can trace plenty of influences throughout Me and My T.V. and guess at the things that might have been in Elliot’s headphones while the project was being written. Or you can skip the “sounds like” game and dive into the unique landscapes of the project unabashedly, no qualifications, no reservations. “‘Why don’t you have a little bit, loosen up. That’ll get rid of that uninviting edge.’”

Take a deep drink of “Gone” and the album’s best angles are deliciously illuminated. “By now you noticed certain themes repeating,” Elliot raps on the standout cut, which concisely communicates a few themes that permeate the project. The lyrics are dense, but Elliot does a good job of delivering each line clearly, and you can follow his thinking in the swirling, eccentric melodies as they progress in intensity.
“As much as we tried to escape this lack of meaning
you tricked us, how dare you so dutifly careful
so rooted in their truth nothing else to compare to
why? why is knowing I'm alive become an obstacle
realizing I don't know exactly who I'm talking to
futility, knowing too much for no reason.
ability, using what I know to make achievements

The emotive volatility in each line’s growling crescendo comes across immediately, pulling at the listener’s heart strings as each intellectual turn pushes you deeper down the rabbit hole. A clear duality is easy to pick out in each tight couplet, as Elliot ponders universal themes of getting lost and losing yourself.

“instilled in me for better or worse a sense of purpose
offers no refuge just makes it more discursive
god damn it. It's the reason I live
and that's as literal as I feel I'm trying to get
It's gone and never coming back.”

As he closes out the verse, Elliot drops all pretexts at ambiguity, and speaks directly from the first person perspective, crossing the fourth wall to remind listeners that “that’s as literal as he’s getting, it’s gone and never coming back.” By asserting his voice without any attempts at subtlety, on a track called “Gone” even, Elliot reveals how closely he’s walking to all of the questions that Me and My T.V. continually asks; the project is constructed as explicitly biographical at times, on “Gone” Elliot explains it’s not just his stories he’s sharing, it’s his emotional reality, this art is all of him. “Every now and then, there are new modalities, new ways of being and understanding the world.  For better, one hopes.”

That flirtation between character and memoir is a clear motif. On “Not Subtle,” Elliot again breaks down any divide in the perspectives between himself and the track’s subject, speaking directly to listeners about the emotional roller-coaster he’s taken them on while characteristically mocking songwriting convention.

“Listen, I'm not as creepy or persistent
As this song may make it seem I'm simply saying there’s a difference
Between my hopes and dreams you can feel free to just dismiss
If nothing else I feel alive and faithful of my mission
Social media is one fucked up and twisted mistress
As I stumble through your profile box is checked relationship, shit,
Fuck.”

At once, Elliot acknowledges the hopelessness and helplessness peaking through the story he tells, and conquers those fears by proclaiming that his purpose, his mission, is bigger than the small worlds of relationship squabbles and self pity that keep us up at night. That victory is somewhat short lived though, as he immediately reasserts his vulnerability through the super real line about the small, stinging, fucking inexplicably frustrating pain that social media can throw into the “healing from a breakup” process. His emotional progression here is far from linear, and that’s true for Me and My T.V. as a whole, but that doesn’t make it hard to buy in to or follow along with; it’s impossible to listen to “Not Subtle” and avoid a pang of empathy, a shadow of visceral connection.

Each track on the project could withstand its own lyrical breakdown and deep critical analysis; Elliot’s literary approach and consistently creative musicality means Me and My T.V. is full of gems, and very rarely if ever falls flat. “He awoke to find his hands all covered in blood, terrified it might have belonged to somebody he loved” he opens on “Man-Wolf,” another tribute to dualism and the vast chasms, psychologically and socially, Elliot confronts all over the album. On “The Thing About Dynamite” Elliot gets more deeply political in his critique, but continues to circle in on a personal narrative, arriving at a place of justifiable lunacy in his refrain to “be cannibals goddammit.” Leaving this project on repeat, there aren’t any joints that I find myself skipping.

And as an album, played front to back, Me and My T.V. does a masterful job of capturing the thoughts that flicker through an insomniac’s head; each track adds a layer, a perspective, an explanation for the prevailing chaos and insanity of the universe Elliot describes.  There’s a cinematic quality here, but an unpredictable one, the aesthetic is held together more by thoughts and feelings than a specific narrative arc. Ultimately, the approach is successful, the occasional senselessness makes perfect sense. “‘Police Academy.  Which is a good movie, Frank.’ ‘It is a good movie, Charlie!’ ‘You want to go back and watch it?’ ‘With all my heart.’”
Me and My T.V. definitely feels different than previous work under the moniker “Eliquate,” which makes sense, since it’s a solo effort by the front man of what used to be a group. That being said, Elliot’s writing shines with its usual polish and insight, and anyone who has connected with anything “Eliquate” in the past will be satisfied with the artistic direction and clever as ever lyrics on display here.


He’s already had a lengthy and storied career as a veteran of the California music scene, but if Me and My T.V. is any indication, Elliot has a lot left to say as an artist, and a ton of musical boundaries left to confront and drive to extinction. As long as he keeps creating music so beautifully odd and profoundly laced with our common insanity, it’ll be worth your time, late at night, to tune in and swim in whatever Elliot offers next.
Album Review
Reactions: