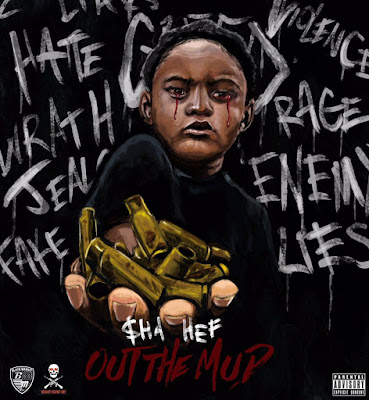 Bronx emcee $ha Hef has released the anticipated mixtape, Out the Mud. Coming "out the mud" has been $ha's M.O. for a while now, so it's only appropriate he drops a project of the same name. We get the third installation to his "Motorola Musik" trilogy, a mixed bag of bangers and wordy ballads, and a feature from Bodega Bamz as well as the late legend, Prodigy. The tape comes together really well, hanging up there with other acclaimed works, like Super Villian. Out The Mud strives off of its consistency, but songs like "No Choice," "Wishing Well," and the Prodigy blessed "Made Me Do," exemplify what makes $ha such an attractive artist. The Heir Gang rapper keeps up his reputation for bringing grime and painting pictures with it, making Out the Mud a thorough listen.

Support $ha and stream below or purchase here.