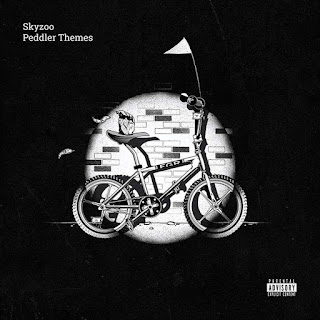 Skyzoo is back again with a 8 track warm-up EP for his December album "In Celebration of Us".

The first track "Short Money" is a track about how short money seems tall and long when you stand next to it. I get the feeling Skyzoo was standing next to and getting short money at a time when he was a short kid, given how in the intro there was a skit about a mother who tries to raise her son right with his father. She trusts her son but also knows that when he goes outside, she knows where he is, what he's doing, who he's with, but she doesn't really know what's going on.

"Bamboo" is the second track and it is complete lyrical and storytelling assassination. With all types of metaphorical gems referenced from the NWA Movie layered all over this, you also get a story about the gun culture in the BK.  https://www.youtube.com/watch?v=0wZ-r1wzUpE

My favorite track on the EP is the third track "Doing Something". Sky lets you know how everything is kind of like how it's been since day one in the sense that when it comes to what he has, he's just trying to make something out of it. Very relatable for me and I'm sure it is for many people. I also noticed the Apollo Brown production right away.

Track four "Finesse Everything" Is the what you expect from Sky, Hip-Hop but with more of the traditional braggadocio, have fun, competitive sport element of it. The prime example isn't just the track's title, for me it's how when the "Who's world is this" cut from Nas' "The World is Yours" record from the classic Illmatic album from '94 came in, Sky simply said "Don't matter, Ima finesse it."

For those of you who like "Soul samples" and a smooth groove beat, track five "Let it fly" is for you.

" '95 Bad boy logo" is the seventh track where Sky shows how Bad boy was a huge influence on his life and who he is an MC.

The eighth and final track is "Long Money". What Sky does here is speak on the importance of long money, and how he's learned to make short money last so it can become long money. I have to speak on how he used the classic sample from the French Jazz band Complex's '71 "Troupeau Bleu" album. The song in particular is titled "Huit Octobre 1971".

All in all, from "Music for my friends" to "The Easy Truth" and now to this project "Peddler Themes", the BK MC is consistently impressive. I'm looking forward to his album "In Celebration of Us" in December.