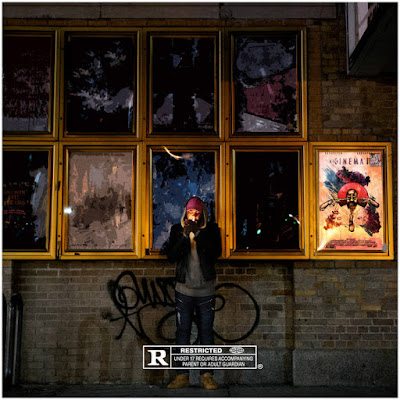 Me and Will are outside the spot, putting up a couple shots, when Stevie comes barrelling down the stairs, headphones in, and calls for the rock. “You see Brooklish dropped? The few songs I just listened to are really good” I yell. Steve doesn’t flinch, puts the moves on us, leaving his earbuds in. We shoot around for another ten minutes, me missing damn near everything. Eventually Stevie gets bored with schooling us in silence, pops out a headphone, and turns to me.

“Brooklish just released his album,” Stevie says casually, “It’s tight so far.” I laugh, try to explain, give up, shoot another airball. Now that I know what he’s listening to, I’m jealous of Steve’s ear that still has a headphone nestled inside. I don’t know all the words yet, the album’s just dropped, but “Laybach Music” is stuck in my head anyhow, cloudy hook echoing on a loop.

New Cinema II, the latest offering from Brooklyn based MC Brooklish, has a way of creeping up on you like that; even after just a few listens, I found myself humming tracks, reciting some of the catchier rhymes, hungry for the next time I’d have a chance to drink fully of the album’s swirling, hypnotic world.


There’s no mystery about the conceptual intentions here; “a boy meets the girl of his dreams, and a lucid experience follows. This is the soundtrack,” Brooklish tells listeners. As a score for the rapper’s cinematic universe, this project works well, woven together by a patch-work narrative and consistent if ambiguous cast of characters. But where New Cinema II shines most for me is outside of our pad putting up shots, in the laundromat when I throw my shirts in the dryer, at the taqueria when I’m waiting for my Carnitas Super Burrito with the spicy salsa, in the living room when me and the homies are unloading about the stress of our days.

Brooklish is explicit about his contained approach on the album; where New Cinema II truly succeeds as transcendent music, where it surpasses its role as the score to this New York City story, are the moments when Brooklish’s soundtrack jumps out of the New Cinema world and into our own.

“Hennessy” pulls off that rare and satisfying combination of banger+thinker double threat. A slick sample and pulsating flow from Brooklish draw you in, you’re head’s nodding by the third or fourth bar, by the time the hi-hats switch patterns in the build up to the chorus and the syncopated delivery hits a crescendo fervor the Henn’s taken over and it’s just about impossible to resist the tracks smooth, velvety, cognac-tinted ambiance. And there’s meat on these liquor soaked bones: waiting for the bus I’m picking through lyrics and looking for hidden metaphors, sitting in my bedroom a few beers in I submit to the intoxicating rhythms with my eyes half closed.

“DFTC” bounces hard, with an instrumental that pushes genre boundaries way outside of the norm and a ghostly hook acting as perfect balancing points to Brooklish’s silky, relaxed flow. There are so many quotables on here: “Getting super hyper off the super fire, Austin Powers,” “Kush rolled quite but it’s sparkin loud,” and “I’m flyer than that flier that flyer n****s be passin out” all serve as witty appetizers for a second verse that’s constructed so impeccably I find my finger lingering on rewind. Restarting the N64 in our dining room, I run “DFTC” back, smiling again when the scheme plays out:


“Flyer than propellers, my mahogany McCaughey / Movin through time I’m interstella /    Catch me in my whip, bumpin hits, rolling hand over fist / Til I get in my groove like Stella, drinkin hella Stella / So I’m pullin over, ain’t finna get pulled over, allergic to the jaila”


“Black Pistol” is similarly stuffed full of bite-sized, delicious, easily digested lines; “I had swag when they called it personality / Wait, that’s just my reality” Brooklish dishes to open his verse. That one is stuck in my head while I’m scrolling through YouTube clips killing time. “The Luv Outro II” centers around a beat that’s pure New York Swank; I whistle the piano line in the park and smile. “Laybach Music,” the first track from New Cinema II that infected my brain, keeps hanging around as my ugly shot bounces off the iron at another afternoon session on our makeshift court.

All of these moments, they’re mundane until you throw a soundtrack on behind the routine. It doesn’t matter that Brooklish’s world is thousand of miles removed from mine, or that the character he fleshes out on New Cinema II experiences things I never have. The music just fits, the tone is right, the motion is right, I never question for a moment why so many of these tracks are on mental repeat. It just fits. That’s lofty praise of Brooklish’s artistry, and it’s also not something that’s true for me about the majority of underground hip-hop ascribed narrative or conceptual aspirations.

What makes New Cinema II land? For starters, an inspiring attention to detail throughout, and a high bar for tight raps, which Brooklish raises time and again as the project progresses. Take note, underground rhymers: if you’re starting to write a project with a concept and structure in mind, at the end of the day it doesn’t matter much how strong that concept is. You’ll still have to devote a ton of time and focus to rapping well. New Cinema II took Brooklish two years to complete.

Beyond the consistent polish that longtime Brooklish fans have come to expect at this point, New Cinema II delivers big on the instrumental and songwriting fronts. Each track feels perfectly crafted around the respective song’s intention, with the Brooklyn MC fluidly switching up songwriting structures and arrangements at his leisure over the warm eclectic beats from producer Aquarius. There’s zero here that comes off as cookie-cutter or formulaic.


Brooklish made it to that happy point of balance, between songs with eccentric moments of stark originality and an album that is overall a flat out groovy joy, by patching together a soundtrack for his New Cinema. And by taking his time. Your reward for returning the favor and lending Brooklish some time of your own to tune in is a project that just might serve as background music for whatever film you’re starring in next on your own set. Me, I’m not touching that dial. As long as these songs stay stuck in my head, Brooklish’s New Cinema II will be airing permanent reruns, and I’m here for every episode.
Album Review
Reactions: