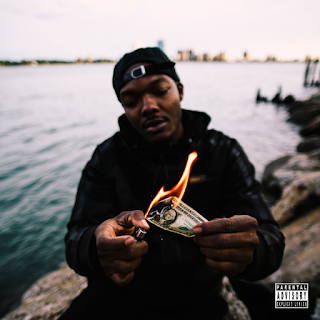 Detroit based emcee L.A.Z from the Detroit based Hip-Hop group Clear Soul Forces is back with a new six track EP entitled "No Paperwork". You can see the emcee burning his last dollar in the projects cover art. The purpose behind burning the dead president is to make the statement that the money isn't what it's all about for the emcee, it's about the music. To prove his point even further, L.A.Z cut off an essential source of income and quit his day to pursue music full time.

L.A.Z said this about the EP  “No Paperwork is the soundtrack to being a starving artist in transition, but still moving to the beat of your own drum and keeping it about the music."

It's clear that L.A.Z is focused on having a clear mind (and soul ;) but I'm stuck contemplating on why the title is called No Paperwork. It could be to symbolize that he's no longer working for paper, or dealing with paperwork at his former job.

In these six tracks the emcee gives you everything from sensual and weed smoke filled vibes on tracks like "Celestial Vibes" and "TGI Fried Daze" ft. F Dot Lawless, to a hint that money is still partly essential to peace of mind and prospering on "Gettahead" and "Loco Dough", to wisdom and a positive outlook on life regardless of your situation on "Keez" and "Optomist" ft. Good Greene.

After hearing this feel good six track EP, I hope that nobody who knows of Clear Soul Forces is sleeping on L.A.Z or the rest of group thinking that Noveliss is the only dope artist they have to offer. I look forward to the next project from L.A.Z, projects from the rest of the Clear Soul Forces crew, and hopefully a group album. The project rating, stream link, and video review on are all below.