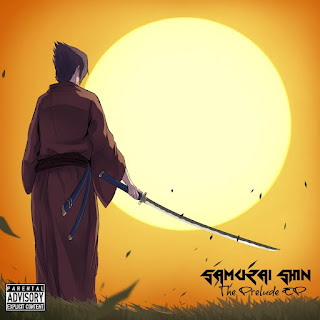 "Samurai Shin" is a comic book series, and "The Prelude EP" is an added bonus that goes along with the newest issue, 1.5. This 22 minute, 11 track EP is a collection of instrumentals and bars from notable MC's. What drew me to this project was my new found love for Anime, especially Peacemaker: Kurogane, and of course, the classic Samurai Champloo. It appealed to the blerd in me.

Keem the Cipher who has three production features is the star of this project in my opinion as his production on the track "Lost" brought the Champloo vibes, he produced the beat for the most lyrically diverse track "Love or War" which was made a gem with the help of Metaphor the Great, and Keem produced my favorite track "Searching" which stood out to me the most.

Kuro Silence held his own here too by producing "Just Life Goes On", "Blue Clouded Thoughts" and even showing that he can emcee on the track "Some days" which is seasoned with Champloo references, and even features the barrel brother himself, Torae.

"Like Water" gives off Champloo vibes like the majority of the tracks, but this track separates itself from the pack by keeping the Lo-Fi tip close to its core.

The last track I want to touch on is "Two Katanas" by Core Demonstration. The group demonstrates that they are Hip-Hop to the core, pun intended, pardon the corniness.


In closing, I have to say that Anime like Peacemaker: Kurogane and Samurai Champloo had timeless soundtracks that did justice for their respective series, and Now Samurai Shin does thanks to this EP.