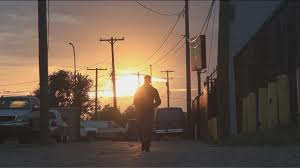 Sareem Poems & Terem release a new video from the A Pond Apart album.

Sareem Poems shares his inspiration for the song, "After the Factory is about what I've experienced and been told about Michigan. I moved to Michigan in 2009 after meeting my wife. Around that time the recession hit Michigan hard. The news painted a run down, destructive, dangerous picture of Michigan. Every report revolved around violence, drug addiction & the population dwindling. Fact is, at that time, that was happening everywhere. It's called despair & migration."

"That's what our ancestors did. They went where the work was. They went where there was a promise of a better life. Some stayed because they saw something most didn't. Or simply because it's home and you don't leave when things get tough. What wasn't being reported was, people rallying together to build community gardens, creating programs to keep students engaged & schools opened. This wasn't the narrative then or now."

"Michigan is thriving, Michigan is growing. Forgotten communities are rewriting their stories. And I'm not talking about the mass gentrification that media outlets are excited to talk about. Michigan's, rich musical & industrial history continues. More innovative ideas and movements are forming. I'm blessed with the opportunity to see it with my own eyes."

"This Cali bred hip-hop head believes in you D."