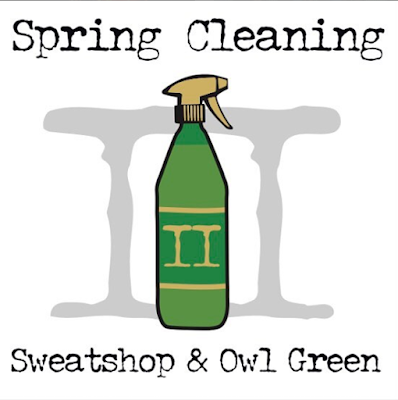 
In the months following the release of their debut album, you’d think hip-hop duo Sweatshop & Owl Green would be basking in their success. Instead, their grind hasn’t stopped a beat, and here they are with their sophomore EP just months later. Spring Cleaning II carries forward boom-bap inspired beats from The Whiteboard, with catchy lyrics that are bound to get stuck in your head until their next project drops.

Before The Whiteboard had time to settle in on Spotify, Sweatshop & Owl Green released another single. “Roger Clemens” hit social media, and a notable Thizzler Premiere spot, with crisp visuals and an amusing lyrical narrative mid-July—special guest appearance by frequent feature, Lex Leosis. The head-boppin’ tune comes with some solid advice on what to do when life gives you lemons. Shoutout to Sweatshop Steve’s two cousins for giving the video the layer of angsty antics it needed. These pretty boys from the bay are back to remind you that life is what you make of it, so send it.

While limited to five tracks, the EP doesn’t fail in showcasing all the facets of the dynamic duo’s talent. On the slow and sing-songy track “Goes Down,” Owl Green reminds us that in between bars, he can still carry a tune. The song is one he’s been performing on tour a cappella in bits and pieces. But with the official release of Spring Cleaning II, the full track is digital, downloadable, and for keeps.


On the other end of the track spectrum is “Save Your World.” “Malt is life” is the standing motto, but the second track on the EP calls for a heavy cross fade as it stands out as the most psychedelic track the boys have made yet. Owl Green has this whimsy he illustrates in his choruses. He’s the imaginative lyricist to Sweatshop’s cerebral, hard truths. With a beat that tickles your funny bone, it will make you wiggle your shoulders and your rapper hand jiggle, while your mind clouds with OG’s inky imagery.


Perhaps the most quintessential track on Spring Cleaning II is “Those Guys”: a diptych piece that sums the duo up perfectly. Different in their own rights, but together they make the work complete. OG is entertaining with his synthesis of those guys; then Sweatshop takes hold of his half of the song with the most direct verse on the EP. It’s a high-contrast track, but succeeds in encompassing both of them separately, and simultaneously. Those guys finna make it big.


Overall, the fresh-faced, old-school inspired duo have done it again: given us chill beats to try and make summer last forever with; while passing along the message to take a step back from life’s chaos, and have some fun.
(Sheridan Kowta is a recent University of Oregon graduate with concurrent degrees in Journalism and International Studies, multifaceted creative, and Eugene based freelance writer and photographer. Currently she is travelling the world and missing her pit bull, but still finds time to write and make wine. Read more of her work and browse her freelance offerings here.)
Album Review EP Main Featured Photography