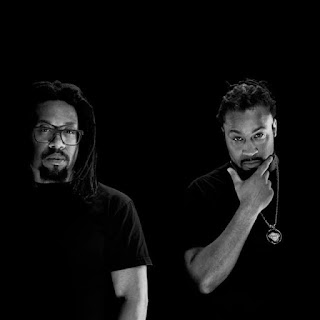 In their latest and second studio album since 2005, Bostonian Hip-Hop duo Mr. Lif & Akrobatik "The Perceptionists" return from their 12 year hiatus to bring the culture their answers to the recent social injustices against humanity in recent memory that are really just extensions of what's been going on for years, primarily in the black community, in the form of an 11 track album entitled "Resolution"

(The Perceptionists are a group but I refer to them as a duo on this album review to due the group producer DJ Fakts One not being instrumental in the creation of this album.)

On the introduction track "Early Mourning" the duo reflects on the tragic and senseless, unnecessary slaying of African-Americans. Whether it be early mourning due to the age of the victims, or victims simply passing too soon, this song hits home for too many people.

The second track "Hose Down" ft. Syne refers to how when citizens get too hot in their protests against injustice in the streets, they need to be hosed down so their bodies can literally become cold. Before even listening to this track, I automatically thought about how civil rights protestors in the 1960's were hosed down for speaking their mind.

"Out of Control" has a simple subject, the world is out of control. Speaking about the world's known problems isn't the only highlight here, the MC's try to uplift you as well while flowing over a blissful instrumental that gives me hope to believe that the world will improve its condition. One of my favorite tracks on the album.

"Lemme find Out" is a track where both MC's speak on the consequences that are to come if they find out, or at least find out more about what the government is hiding from the masses. Don't let this track give you the idea that Lif and Akrobatik are ignorant though, these are intelligent and aware brothers.

The theme of the fifth track "When Push Comes To Shove" ft. Dutch Rebelle is being down to ride or die for your significant other when push comes to shove, regardless of whatever the current status of your relationship is.

"Let's Battle" takes it back to an old school Hip-Hop tradition, battling. It takes it back to when the original golden ages made battling the core defense of an MC, when Hip-Hop was more fun and competitive. It's good to see the duo make a record about an element of Hip-Hop that is far from dead, but far from its original hype in popularity. To sum up what happened on this track, when Lif and Akro got tested, they responded lyrically.

"Free at Last" features Syne again and is one of my favorite tracks on the album. Here is where you get the most empowering lyrics and vibe from the music.

"Grab Hold" advises people to stop trying to grab hold and understand what they cannot control.

"A Different Light" is a track I'm sure we can all relate to. It touches on coming to a realization of a person one may think of in a positive way, and then you see their true colors and begin seeing them for who they really are, seeing them in a different shade, color, a different light.

The final track "Resolution" is where Lif and Akro make themselves vulnerable by putting their flaws in the spotlight, admitting their mortal men.


I didn't get to hear The Perceptionists first album "Black Dialogue" when it came out in 2005, I was eight at the time. I'm kind of glad though because Resolution has now made me want to go back and listen, and I know I'll be able to appreciate and understand it more now than I ever could have back then because I'm 20 and have experienced a taste of real life now.

To close, Resolution is an important, socially aware, and essential album for Hip-Hop, especially in 2017. I have no reason to doubt that it won't stand the test of time.

For a more in-depth review, I left my video review on YouTube below.