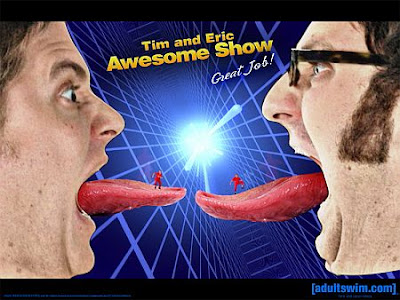 10 years ago the world, especially me, was not ready for what comedians Tim Heidecker and Eric Wareheim were about to bestow upon us. I remember in my days of staying up past midnight
and channel surfing, I would always come across Cartoon Network to see these two out of their mind
guys. I'd stop for a few seconds to watch and think to myself, "watch a bunch of losers. This show
isn't funny why is it even on TV?". But little did I know that I'd become such a big fan. Every night I'd
continue to pass the channel when they were on and catch a glimpse of their wacky skits, each time
watching a little more than the night before. Suddenly I found myself laughing hysterically.

At first it just little smirks here and there, even just smh to the stupidity of the two. But I was hooked.
Not sure if it was the boredom of not having any else better to watch, or if I actually cared about
watching them. Then I started learning of my friends and family that actually watched them as well. I
even got my best friend, who hated them just as much as me in the beginning, to think they were the
funniest thing around. I realized that I entered this underground cult of Tim & Eric followers.
Every time I'd get up my friend or cousin we would always quote their skits of horrible actors and
absurd products. Asking each other, "did you see this one, or that one?".

Even when the show ended 7 years ago we still had new weirdness to fulfill our obscure needs with
shows like Decker, Eric Andre, Bedtime Stories and more. It's now halfway passed 2017 and after the
recent news of the comedic geniuses Anniversary Tour hitting most of the major cities in the US as
well as some in Canada, the dynamic duo and Adult Swim have now announced a special 30 minute
special to air on August 27th.

So I have taken the liberty of posting a collective of the top 10 (in no particular order) funniest
sketches, as opinionated by myself, friends and the internet. Please enjoy and let me know your take
as well as skits I should I used.

This video in a nutshell has all the ingredients of Tim & Eric humor. A dumb ass song, the hilarious
sound effects, awkward dancing and acting and to top it off the out of this world animation of two
fetus's with handle bar mustache's that pop out of a pregnant woman's belly.

The one thing about that separates T&E's comedy from other shows is the editing. The choppiness
and rapid stuttering along with the animation mixes perfect with Will Ferrell's style.

There are a few of the morning mediations that crack me up. But this one right here gets me every
time. The cracked out look of this actor when he walks in automatically makes this hilarious. Then
he starts weirdly dancing out of no where. They have him on all fours roaring like a lion but they
replace it with what sounds to be a duck call. It just makes me wonder what they tell these people
to do to act this way and if they actual take this as a joke or not.

7. Dr Steve Brule: For Your Wine

Every Steve Brule skit is funny as fuck. I had friends of mine that didn't watch the show, only watched
the Brule's Rules sketches on youtube and we quoted lines everyday for weeks. Out of all the segments
tho we loved this one the best. John C Reily is a comedic genius with this role and having his character
drunk only makes it that much funnier.

Me and my boy have acted this skit out hundred of times. The flicking of the temple, the walking
backwards, the palming of the head and moving of the finger. Throw Ray Wise in and it makes
you laugh every time.

It was hard to choose just one of the cinch products as the best, so I had to go with these top 3.
The janitor in the urinal skit is too hard to not laugh at, plus they add in a little music breakdown
in between and its a classic. The Bro-oche is one of a few skits that places those two guys together,
and each time no matter what the product is, has Kent removing his teeth. The part that gets me all
the time is the screaming and throwing up just because of a shirt. And the sound effects, lmao. Ed
Begley is out right funny in the last skit. His face when the number is 0 makes me die, along with the
red burn mark on his face. Then his conversation at the end is key as he can't hang up cause the phone
only works for one call.

This one is definitely underrated. First off what is Paul Rudd doing for work? The outfits, the dancing,
the seriousness of Paul's character. I don't know what or who celery man is but we all love it.


I couldn't choose just one particular scene from this episode so I choose the entire one. Both Zach
and Ted Danson's sketches were too funny and then when that old lady comes in her lines and acting
couldn't be more of a knee slapper.

By far the best Pierre skit. "Megabytes per second must be in the billions. Wtf is this? Dial up?"

It's impossible to watch this and not laugh. Will Forte is the fucking man! His confrontation
between himself and his screaming father is sure to crack you up. How these kids kept straight
faces is beyond me.