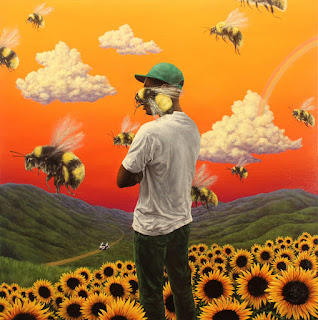 From love, insecurity, suicide contemplation, loneliness, to boredom. Tyler, The Creator is covering it all on his fourth studio album "Flower Boy". If "Wolf" wasn't enough, we definitely got signs on "Cherry Bomb" that a change of pace in sound was incoming from Tyler. This album confirmed those hints. Tyler is a very open person who is comfortable in his own skin, but I don't think anybody could predict he'd be so open on subjects that some like to keep very private.

On "Where this flower blooms" Tyler takes it back to life before he was on saying "went from statistic to millionaire, CNN doubted my skin is dark but they forgot when I get in my car."

Tyler seems to keep theme of this album about life before fame though, while also giving you a glimpse of what his life is like today. When he speaks on the feelings he had as an adolescent that he thought were just a phase, and the signs that he showed his friends while they didn't notice on "Garden Shed", and his "Been kissing white boys since 2004" lyrics on "I Ain't Got Time" it proves that Tyler doesn't care about whatever the "consequences" may be for him by throwing things out there that some people may call "suspect" and ridicule him for, which he has received a good amount of and instigation from due to the lyrics of these songs, in various forms of ignorance.

"November" is the track where Tyler expresses how much he wants to take it back to November, because that seems to be the month in a certain year where he felt extremely happy, like his Summer was in November.

Whether it's the Frank Ocean vocals on many tracks, song composition help from the Legend Roy Ayers, or just Tyler himself, the smooth, upbeat, haze/daze, soul, jazz, Alt. R&B, Psychedelic, synth and sequences that mesh perfectly with Tyler's open and at times dark lyrics, this is Tyler's most mature album to date.

I have to credit "Foreword" for setting the overall tone of this album by being beautiful, metaphorical, and dark. I also want to show respect to the song "See you Again", which was a love banger that had so much going on musically at times that it completely set itself apart from the other tracks on the album.

And finally a quick shining of the spotlight to the songs "Pothole" featuring Jaden Smith for the simple fact that Jaden didn't ruin it, "Droppin Seeds" where Lil Wayne was featured on bodied the track metaphorically, example "Like Adam in the garden of Eve, my bitch got a apple bottom but she swallowing seeds." and the final track "Enjoy right now, today" for being the perfect outro to a damn good album.