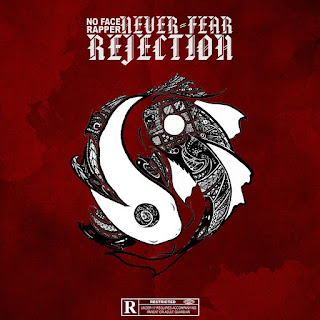 Author’s Note: Back in the day growing up one of my favorite parts of getting physical copies of albums, was opening up the CD case and seeing thick booklet full of liner notes. Seeing who did what verse, who made the beat and most importantly what was the artist thinking and what was the process like making the songs and the music. With the continued rise of the digital age, some of this has gotten lost in the shuffle. In our series “Behind the Music” we ask artists to craft liner notes for their release to give fans and listeners a deeper understanding of the process. Virginia emcee NoFace Rapper is one who goes against the grain. An emcee improving every day to gain an audience, but also introverted to the point where you’d probably be surprised he puts all his emotions on the mic. Earlier this year NoFace put out his debut EP “Wintercoat” and to follow that up he’s released “Never Fear Rejection”. Check out his liner notes for the EP below. Know Face: For "Know Face" I wanted to set the tone as being much more light hearted than my previous project, Wintercoat. I also wanted to re introduce myself to new listeners and let them into my mind with certain ideals I live by. This is a really dope intro, but I guess I'm biased lol. No Grammys: "No Grammys" had those victorious horns in it and I knew I had to get this beat. I scroll my timeline and see alot of artists complaining that they don't get their just due or their props but it's like yo, not everybody is gonna be the number 1 artist. There's so many dope artists that occupy so many spaces and make a living off what they love. I wanna occupy that independent "I'm kinda popular but I can still go to the chick fil a and not be recognized" kinda career ya know? I'm also perfectly fine with working a day job knowing I'm putting out honest music that I can be proud of. Stranger Things: Tyler Wrighteous provided the "Stranger Things" beat. This was a wild card. He definitely challenged me and I had no idea how I was gonna approach this beat. To me, the beat sounded like Luke Skywalker had a Bose system bumpin some unnecessarily ignorant hip hop in the X-Wing. Hence the alien references. This song for the sci fi geeks who like hip hop. Velma's Interlude: "Velma's Interlude" was a letter to my grandmother who passed last year. I had a lot of regret because i didn't have much contact with her but when she passed, it hurt. Also the events that transpired after her death with my family disgusted me even more. Poor people fighting in court over property is such an odd thing. It's not even worth it after you pay all the lawyers, fees, and etc. Lowkey: The plight of my introvertedness (hope that's a word) is discussed in "Lowkey". Being introverted has proven to be a challenge while dealing with music because I hate networking. I enjoy meeting new people but if I'm not in the mood to meet you, then the interaction will probably be awkward. I also feel drained when I'm around lots of people for long periods of time. Do my introverts feel me?! I'm working on it I promise lol. Divulgence: "Divulgence". Root word, divulge. I pride myself on being completely honest and forthcoming with my music. I want to be relatable and I use this as a weapon. This song is the dark side of "Know Face". I'm giving the listeners a takeaway from this project and letting them know this is who I am and I have to embrace it. I hope the listeners embrace themselves as well.