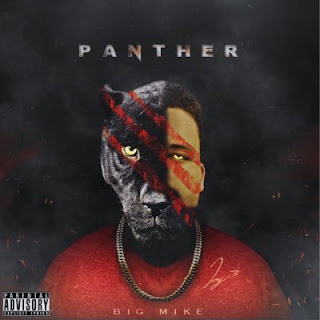 Back in March of this year, I was fortunate enough to come across upcoming New York MC Big Mike and his debut project "State of Mind". After reviewing that project I had the pleasure to interview Mike in June. I could tell from what I had heard on State of Mind and in our interview that Mike is a hungry artist with a bit of a chip on his shoulder. Now I'm here to review his new project, "Panther."

On the first and title track Panther Mike strays away from his element and emcees over trap, but manages to sound like he's right at home. Here he's hungry and ready to kill any competition and overcome depression, anxiety, subliminal hate directed at him, etc.

Open Up is where Mike is telling a crush to open up to him, because she's not bothering him like she thinks she is. He expresses how he's down to be patient because he has visions for him and her because she's been down for him, now he wants to return the favor.

On a different note, Grave soon Mike explaining how even though this one girl has Mike's eye, she's so bad for him that she's gonna put him in the grave soon.

Novocain is a track where Mike makes himself vulnerable by speaking on being scared of reality, the present due to how he viewed how it'd be when it was once the future, doing things he's not proud of, fake people, and more.

NTF is a lot like Summertime in the sense of how vibe driven it is, except here it's like "Wet Dreamz" by J. Cole gone wrong. As soon as Mike finally gets to smash a chick he's been longing for, he can't get it up. Fuuucckkkkkkk.

Confidence ft. Lavish is Mike's ode to the girl who gives Mike confidence and makes him actually want to get up tighten up a bit. Lavish seems to have struck gold, even finding a diamond in his crush.

Outro is my favorite track because even after the heartfelt loneliness, depression and anxiety I've heard Mike express, his closest friends come together to tell Mike just how much he and his music encourage him, and how proud they are of him.

Mike is two for two for now, I have all confidence that he'll go three for three with his next project.