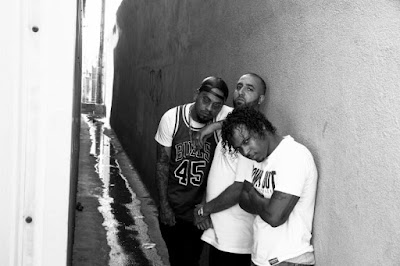 The west coast connection is so real on this one. G-Worthy, composed of Cardo, Jay Worthy, and G-Perico (from left to right in the photo above), is gearing up for their project of the same name, Never Miss. The title is true to their craft. Cardo continues to solidify himself as one of the most diversified producers in hip-hop; being able to keep an eye on his platinum-produced whereabouts while still slamming the respirators on g-funk with authenticated tracks like this one. There is no one better than the visionary Jay Worthy (one half of LNDN DRGS), or the jheri-curled G-Perico to hit this track. The two exercise impressive chemistry with contrasting vocals, bringing a timeless sound and charisma to the first single from the upcoming project.

Never Miss, is slated for a Sept. 29th release via Fool's Gold Records. Listen Below.