Every HERO & VILLAIN has their cool origin story but that isn’t always the case sometimes.

After unknowingly smoking something super radioactive, which was grown inside an underground laboratory deep in the earth’s core, somewhere like in a mountain or something, by mad scientists working on a TOP SECRET government experiment named “PROJECT GOON”, our dastardly duo were bestowed with ultimate MEGA RAP GAWD SUPER POWERS & capes & sunglasses & shit.

Stig Of The Dump aka King Grizzly aka GOON and Stu The Don aka King Hippo aka GOON are double-'ard, mad fly rap stoners; LEGION OF GOON.
SUPER VILLAINS to many, SUPER HEROES to a hardcore few.
“It is the purpose of the Legion to align our infamous forces against the powers of good & defeat them, leaving us the rulers of the world”. 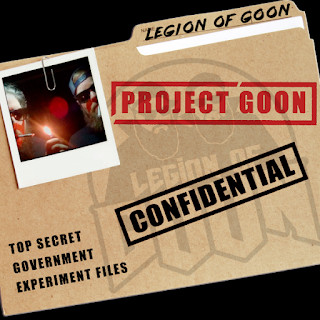