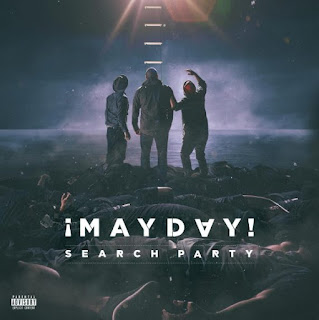 The Mayday men of Strange Music can't celebrate the release of their sixth studio album Search Party in their native Miami, as scorned mother nature has dispatched Hurricane Irma to unleash fury upon the Caribbean and now Florida; however, no matter where they are for the initial reactions to the LP, they'll no doubt be close to fans, as supporters of the trio can now be found all over the country and around the world. In many ways, Search Party is standard product for Mayday, despite their having lost a few band members in the last few years (down to Wrekonize, Bernz and NonMS). It could also mean they’ve tried harder than usual, to get back that breadth of sound and style they had with more personnel. Basically, this particular search party has more or less found what they were looking for.

In the beginning, the guys set themselves up like conscious distraught truthseekers, with thoughts on being lost and found, the problems we as people face, and how we’re separated and apart from the true nature and essence of life and thus alone. Starting around track five though, in the “Better Place” station where the crew start to find amusement for themselves, the tone changes to a fun one for a bit, if only for a couple songs. Tech N9ne shows up and we pretty much get a real party, just enough of a party and not a crazy wild one either. The rest of the revels on Search Party pop up sporadically, in throes of flirtation found in “Have Someone” and hangouts and after hours in “Do.”

The bulk of the album then is patented Mayday pensiveness and poignancy, several times concerning romantic relationships. In “Pretender,” a one night stand is (probably rightfully) seen as an intimate rendezvous that sticks in the mind and obscures the vision, sexual attraction and urges are seen as distractions and unwanted beckoning calls in “Tempted,” and “Extra” focuses on the overwhelming nature of a partner. Needless to say, the goings get stymied due to this negativity, but it does help that in their last relationship-related discussion, “Same Old Us,” Mayday say that while the connections they’re in are typical day in and day out, they are in fact reliable, unshakably trusty.

With all this mental malaise happening, it’s no wonder Mayday make time to purge (“System”), disconnect from the everyday routine (“Airplane Mode”) and go to their coping strategies (“Save Me From Myself”), and last song “One Way Trip” is a perfect description of what getting older is—not going back to where and what we were before, for the good mostly but also for the not so good as well. From top to bottom, Search Party takes the slightest of dips as far as offering intellectual subject matter goes and this is really just the usual based on the group’s reputation, but the cool expert production is chill and enjoyable, the emceeing is still quite solid and there is just enough variety of topics to keep us tuned in, if just for one listen. (3 out of 5 stars)
Bernz Hip hop Mayday music new music NonMS rap Search Party Strange Music Inc Wrekonize
Reactions: