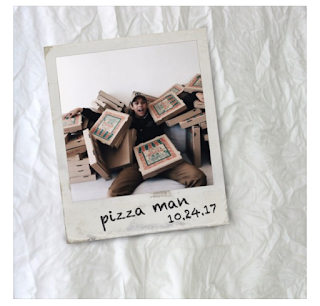 I consider myself something of a delivery food connoisseur, so when Rudy Kalma's new single "Pizza Man" hit my inbox, I was curious from the get-go about how the San Francisco Bay based MC would bring something new and unique to a trope I'm so intimately familiar with. As his first commercial single, Kalma had an opportunity to make a fresh impression on me with this one, and the smooth, old-school inspired, chill-ed out vibe of "Pizza Man" definitely converted me to a fan quickly.

With a home base in the bay, the Rogue Wav Collective affiliated Kalma is certainly debuting in a crowded field full of talent, but his take on boom-bap inspired groovy music is just fresh and just familiar enough to stick. "Pizza Man" combines the kind of narrative lyricism you'd expect from bay area indie staples like Hiero with enough vocal versatility to hook even the most jaded ears. His song writing structure stands out on this one especially; the "Pizza Man" imagery evolves fairly quickly, and Kalma uses a ton of variation and nuanced structure change to build a rewarding emotional climax.


As of now, Kalma's got a few more interesting singles planned for release in the next months, and it'll be exciting to see how the MC's obviously evolved artistry translates into a commercial career. With the established Urban Native Era team in Kalma's corner and a wealth of talent and original perspective, the sky is the limit for the Filipino-American hip-hop song-writer. We'll be tuned in, hit the rewind on "Pizza Man" above from Rogue Wav's Rudy Kalma, and connect with the Bay Area MC below.