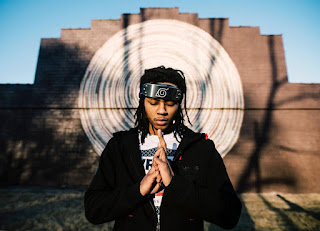 Back in July of 2016 I came across Detroit MC and Clear Soul Forces' own Noveliss when he dropped his Mic Swordz EP. I found that EP at a time when I was completely burnt out on Hip-Hop for a couple of weeks, and it was that EP that brought me back. Since then I've reviewed his Dilla Instinct EP from this year, and now I've had the opportunity to interview the MC himself and bring it to you the Hip-Hop community, here on OK-Tho.

So Noveliss, could you tell us about how you got in to Hip-Hop? Like who and what were your first introductions and influences of the culture and how you eventually got your foot in the door as an MC?

Noveliss - Umm...when I was a kid, my cousin Jason used to babysit me and my brother Chris and I used to always go in his room and listen to his tapes, then I started stealing them lol.  First rap album I ever heard front to back was "It Was Written" (Nas).  Nas was definitely my first favorite rapper.  I never knew I wanted to be an MC until one time in middle school, I rapped at a pep rally in front of the whole school.

Who are some of your all-time favorite MC's, groups/duos, and producers?

So your next project that's set to be released "Kenjutsu under the Moonlight" drops on Halloween and I see that you said it's a tribute to Nujabes and your fallen best friends. Could you speak on the title of the project and what drove you to make a project dedicated to those you've lost?

Noveliss - My favorite anime, "Samurai Champloo" really inspired the title.  Kenjutsu is sort of an umbrella term for arts of the sword and it's mentioned as Jin's style in the show.  Whenever I think of Samurai Champloo, I always picture Jin battling one of his former classmates; Yukimaru in the mountains, under the moonlight, that's really where the title came from.  I listen to Nujabes beats all the time and I always wanted to create something over his work but I couldn't do it without it having some serious purpose behind it.  The loss of my friends gave me that purpose.

I've been listening to you since Mic Swordz dropped and in the music, titles of songs and the projects, and project covers I've noticed recurring anime references. Other than a form of entertainment, is anime also an outlet, and inspiration/influence for you as an artist and as a person?

Noveliss - Absolutely.  It's who I am.  It's important to allow yourself to be inspired or influenced by more than just music.  Anime is a culture in itself, it's shaped the person I am and with me being myself in my music, it naturally spills into it.

Given that last question I have to ask, what are some of your favorite anime, comic books/manga, and samurai movies assuming you're into those too? Personal bias aside, what do you think are the best comics, manga, samurai movies etc. like, just from a standpoint of their impact and how highly they're regarded?

Noveliss - My all favorite Anime are; Samurai Champloo, Naruto, Hunter x Hunter, Dragonball Z, Cowboy Bebop, My Hero Academia, Ruroni Kenshin, Fate Stay/Night, Afro Samurai, and Full Metal Alchemist.  Naruto and Hunter x Hunter are my favorite manga but My Hero Academia is becoming an all time favorite.
Comics I've always stayed Marvel but I am a big Green Arrow fan.  Deadpool, Black Panther, Iron Fist, Avengers, Ultimates, Uncanny X Force, those have always been my go-to's.
I love martial arts films but strictly samurai, I'd have to say Crouching Tiger Hidden Dragon is my all time favorite, I love Hero and the Live Action Kenshin films as well.
Personal bias aside I think obviously as far as impact goes, Dragonball is an all time great as it served as a big time gateway anime for almost everyone that's my age.  But on the manga front, Naruto is the greatest story ever told.

I notice you're a fan of professional wrestling, who are some of your favorite all-time and current favorite wrestlers, character/personalities (commentators, interviewers, etc. as well as favorite promotions? Again personal bias aside, who do you think are the best wrestlers, characters, promotions, etc. of today and all-time?

Noveliss - I am a die hard wrestling fan, have been since I was like 5.  My all time favorites are; AJ Styles, Rob Van Dam, Hayabusa, The Great Muta, Randy Savage, Diamond Dallas Page, Ricky The Dragon, Ultimo Dragon, Jeff Hardy and Eddie Guerrero.  Currently AJ Styles and Kenny Omega are my favorites.
I grew up on WCW, ECW and WWF, got into the indie stuff and Japan when I got older.  WWE is falling down the ladder right now.
M favorite promotion for the last few years has been NJPW and match quality wise I think it might be the greatest promotion ever.  I love ROH, PWG and Progress.  AAW is an indie promotion in Chicago that I love as well.
I think right now, AJ Styles, Kenny Omega, Kazuchika Okada and Tetsuya Naito are in a class of their own as best in the world.  I think all time, in the ring; guys like Styles, Shawn Michaels, Flair, Steamboat and Guerrero are up there.  Greatest character is hands down the Undertaker, Savage and Flair as well.

You're not the only MC who is a fan of wrestling, anime, comics, etc. They're actually pretty popular to artists and hip-hop fans. Why do you think those forms of entertainment are so beloved by the Hip-Hop community?

Noveliss - Because at the end of the day we love and appreciate art and creativity.  We understand and thrive off culture and being a fan of these things means being a part of their culture.

How did Clear Soul Forces come together?

Noveliss - I met everybody at a random open mic. Very Long story short, we all met up for a studio session, ran into Royce 5'9, ended up rapping for hours with him, he told us we should be a group.  The rest is literally history.

You're not the only member of the group dropping music, L.A.Z dropped his no paperwork EP recently, but when can we expect the next group album?

Noveliss - Not sure, but we ARE working on it so it IS coming.

Noveliss - That's always the goal and the dream.  I have a family to take care of so I have to work as well as do this.

If I'm not mistaken you're a father. How is life as a father and as an artist? How do you find time for both?

Noveliss - It can be tough but I wouldn't trade my journey for anything in the world.  You don't find time for both, you just put your energy where it's needed and the rest takes care of itself.

Noveliss - I don't get out often, it's like pulling teeth to get me to go to something if it's not the gym or training.  But, the Detroit Hip Hop scene is and will always be dope.  Tons of talent.  Royce is a legend, I don't think people really understand or appreciate what he does for Detroit Hip Hop.  He's a friend and he always looks out.  Shoutout to Nolan The Ninja.

How do you feel about the current state of Hip-Hop as a whole, especially musically and subjectively? Is there a fair mesh of underground and mainstream in your opinion?

Noveliss - I don't really think about that, I think Hip Hop will always be in good hands, there's underground cats who carry the torch properly and always will be.  I'm not a fan of the current mainstream sound but that's nothing new.

What artists and producers have you not worked with that you'd like to work with, especially in Detroit?

Is there anything we should expect in the near future? Another solo project, a collab project, features on other artists projects, etc?

Noveliss - A full Noveliss album and a new Clear Soul Forces project and Dojo Dreamers, wont tell you what that is yet.

Lastly, any advice to aspiring artists?

Noveliss - Always be yourself and put yourself in your art.
Clear Soul Forces Interviews Main Featured Noveliss
Reactions: