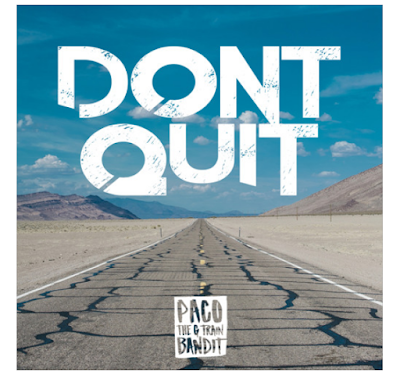 Paco The G Train Bandit made a name for himself in New York City's crowded underground hip-hop scene by handling boom-bap bars really, really well. On his latest single "Don't Quit," Paco's back and his pen's sharper than ever, but stream the new jam below and it's clear his upcoming album will sound unlike anything he's released to date.

"Don't Quit" has all the characteristics of a modern trap-inspired anthem, from the processed vocal harmonies to the familiar hi-hat sounds. Break down each ingredient in Paco's recipe though and everything you'll find speaks to the New York City rapper's unique perspective; the choral layers are advanced and nuanced, Paco's flow retains some inviting familiarity, the track's ethos of perseverance speaks to Paco's dedication and experience. Plenty of New York City rappers are working to evolve the underground boom-bap aesthetic, on "Don't Quit" Paco takes big leaps without sacrificing authenticity.

Lyric wise, the content on "Don't Quit" is dense and personal. On the opening verse, Paco ponders a handful of "what ifs" that anyone who has devoted themselves to art can relate to. As he reflects on getting over self-pity and re-discovering focus, the track's ultimate positivity shines through. Paco's faced his share of challenges but he's still moving forward and still making music that tells his stories eloquently. Stay tuned for his upcoming album, and revisit "Don't Quit" above for some hints about what the new project will sound like.