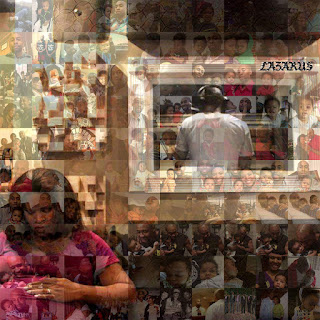 Longtime Brooklyn emcee Sha Stimuli (Sherod Khaalis) took a four year hiatus from the music in the years of 2013 through the greater part of 2016. In September and December of 2016, the conscious rhyme-gymnast at last dropped two singles, “Sticks And Stones” and “New Jordans/A Poem For Mike.” Lazarus, Khaalis’s comeback LP and a September 2017 release (with 10 Minutes Late Records) can already easily be called one of the supreme rap highlights of the year. In it, the straight-up lyricist and role model sounds not a day removed from his craft. Listeners are in for real honest stories, wholesome lessons and a clinic in the fine points of rapping all in one.

Since Khaalis has been away so long and also because he’s not caught in the mainstream spotlight, his background needs some revisiting. This artist’s journey began during the golden era. As the younger brother of Masta Ace Incorporated producer Lord Digga, Khaalis would learn from and contribute to his elder sibling’s work. In addition to befriending Masta Ace, he also met the other Juice Crew artists being in such close proximity to him. Khaalis’s own debut LP, My Soul To Keep, arrived in 2009, but he is perhaps most well known for his extensive mixtape discography. In 2008 alone, he released twelve of them, one in each month of the year.

In Lazarus, Khaalis of course stands out for his outstanding wordplay and messages but so does the rock and gospel-tinged production with samples of “Frere Jacques,” Paula Cole’s “I Don’t Want To Wait” and more. Plus velvety song-vocals by guests like the reappearing Jennifer Myles provide nice counterbalance to Khaalis’s intense lyricism. More than mere supplements, this music and the feature artists are part and parcel of the project alongside the main attraction—Khaalis’s priceless verses.

With his complex yet conversational flow, he raps on the tragic, violent hood-environment and how his life as a child revolved around basketball, rap and the streets in “The Wake, Pt. 2.” Another opus and an industry study in fact is rolled out (or enrolled you could say) in “Jail University,” where Khaalis examines how the separate paths of prison and college affect a career in rap, differently and sometimes with little to no difference.

We really start to see how healthy his mentality is in “So Grateful” and then immediately afterward in “The Edge, Pt. 1 & Pt. 2.” As you may have guessed but are yet to truly experience the glory of, the first describes how blessed our author is just to be alive. In the second, he says ‘bring it on’ to any and all tests of strength that could possibly come his way, with a ‘give-me-all-you’ve-got’ attitude, and by summoning his inner Melle Mel stating, “please push me ‘cause I’m close to the edge […] ‘cause I, I wanna know if I can fly.”

Your heart and soul will no doubt be soothed and warmed by the end but also, your mind will happily carry the weight of Khaalis’s load-bearing speeches. He discusses the struggle for positive racial identity in the hood and the deterioration of the health of black culture in America due to commercialism for one, how media and program directors for example have played a ravaging part in drawing a distorted picture and painting the color lines with unsuitable hues. But still, Khaalis doesn’t shy away from placing some responsibility on the shoulders of the very people who are having the hardest time. Because some of their problems are self-wrought.

Khaalis remembers to say something severely critical about absentee fathers in “Remember Me,” following it up with a tragically ending cheating-slash-domestic-violence story across songs “Bad Day” and “Escape The Lies.” Fortunately and as a result of great song placement, penultimate track “Impatience” comes through to encourage us to seize the day, reach our fullest potential, and recognize and appreciate the greatness of simply having life. Using his positive knowledge and wisdom, his sincerity and of course his high caliber flow, Khaalis enriches the spirit, whether he’s inspiring us to fight on with force behind his firm words or by connecting with us through his clarity and sprawling relatability. (5 out of 5 stars)

(Sha Stimuli's Lazarus can be purchased at all major retail sites and can be streamed on YouTube and streamed and purchased on Bandcamp.)