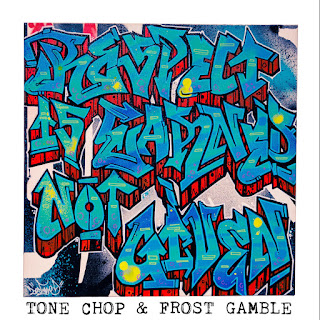 I remember reviewing the warm-up EP 'Veteran' from Tone Chop & Frost Gamble back in Nov. of 2016. Now the duo has released their debut collab album 'Respect is Earned, Not Given'. I wasn't disappointed with Veteran, so I had no reason to believe that I'd be disappointed in this.

Tone speaks for himself and Frost on The Return Intro letting you know that the duo is back for more, and that they never left.

On Walk the Walk, the track is aimed at rappers who portray themselves as bigger than they really are, and rappers who have ghost writers. This track also features the legend Kool G Rap, return of the don once again.

Bing Stories is a story about how Tone needed some weed for his meet-up with a lady friend at the lab. Even though Tone doesn't smoke, she wanted some bud so he hit his homie up who always got it on him. When Tone arrives for the pick-up, goons run in and rob Tone's man for the work. After that experience and a word from his homie, Tone's man decides that the game wasn't for him. This all left Tone with no weed, but one hell of a story to tell his lady friend at the lab.

Tracks like Passion and In The Streets (ft. DNA) , and It's Hip-Hop are real feel good tracks with themes that display a real love for Hip-Hop.

Get Beat Down and Guillotine Chop ft. Planet Asia & White Rhino Are themed around lyrical assassination of your opponents.

The 11th track Inspiration is a Lo-Fi sort of beat that comes with words of encouragement and wisdom from Tone.

The closer track See you Again is an ode to Tone's fallen friend who he promises to never forget.

Tone and Frost have led by example and earned my respect by coming through on the finished product, after getting me ready for it almost a year ago.