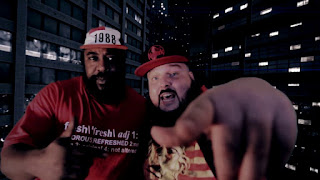 The top of the world is a hard mountain to climb,
and Black Market Militia's William Cooper has continued to take on this challenge every time he steps into the mic booth.  On  "Holy Mountain",
Sean Price and Stoneface add on to the cypher by sharing their insight on how this goal is attained. The three bar-barians spew lessons on how to
"keep rising to the top until you reach the apex..." over an adrenaline laced
BP-produced soundscape.

The state-of-the-art "Holy Mountain" visual is imagined, constructed and directed by Mike Hanratty of Scientific Lens.  When speaking to William Cooper about the video he stated, "Mike Hanratty simply gave us his visual interpretation of the song. He had complete creative control of this video...
he created an epic piece of art".  Cooper went on to say, "We filmed this about
3 years ago and I am happy the entire world will now finally get the chance to enjoy this... this single/video was always intended on being the cornerstone of my album (God's Will)... I still can't believe that Sean P is now gone in the physical form... I am honored to have worked with him, build with him and meet his wonderful family."
Hip hop Hip-hop Main Featured Music Video new music new song rap Sean Price single Singles Song Underground
Reactions: