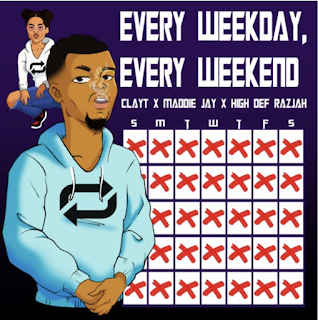 Virginia Hip-Hop artist Clayt has been consistent with elevating his music all throughout 2017, and each record release has helped to reach a new pinnacle. His latest effort "Every Weekday, Every Weekend" comes on the heels of his recent Adult Swim feature track, and features Maddie Jay From BET Tales, as well as an older episode of FOX's hit series, "Empire". The two mesh incredibly well over the HighDefRazjah production and provide a rather triumphant melody as Clayt plays on the concept of weaknesses. 2017 is coming to an end, but the bangers are still living on.

Tune in below to Clayt's new drop "Every Weekday, Every Weekend" and keep it locked for more new music as it surfaces.