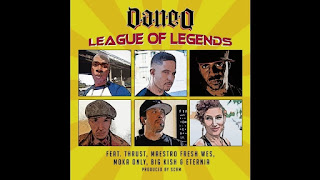 Directed and edited by XCON and produced by Will X Movement, "League Of
Legends" is the first video from Dan-e-o's milestone-celebrating fourth
album entitled, "Dear Hip Hop: 20 Years Later", which is out now on URBNET
Records.

Reuniting with Scam, the producer of "Dear Hip Hop", Dan-e-o joins forces
with some of Canada's most elite lyrical legends - Thrust, Maestro Fresh
Wes, Moka Only, Big Kish & Eternia - for a bouncy, 90's-esque posse cut
for the ages!