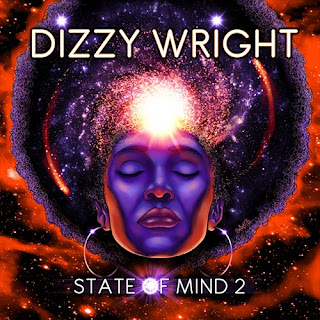 Unlike his one time Funk Volume labelmate Hopsin, Las Vegas emcee Dizzy Wright is on the right track when it comes to giving fruit-bearing subject matter. Wright’s second album of the year, and the followup to The Golden Age 2, bursts forth with wisdom, ultra-positive as usual for the independent rhyme-artist. The album, State of Mind 2, the sequel to Wright’s 2014 EP, advocates for an alkaline diet, rediscovers the importance of black activism, exhorts us to consider others’ hardships and much more. Guests like Audio Push, Ill Camille and Jon Connor promise lectures for above-and-beyond thinkers, and producers Roc N Mayne, DJ Hoppa, FreezeOnTheBeat and others guarantee a mixture of traditional hard-hewn sounds and relaxing soul and jazz. It has the typical Dizzy Wright feel and format and not many new talking points (the newest of which are Wright’s abbreviated raps on healthy eating) but fans and newcomers will still appreciate his commitment to intelligence, philosophy and consciousness. (3 out of 5 stars)