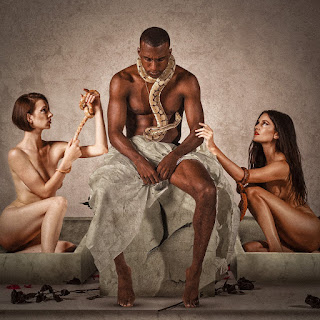 Let’s make one thing very clear before we delve into Undercover Prodigy Hopsin’s fifth LP, No Shame. It is his first on his second self-made label since the dissolution of Funk Volume in 2016 but more important to note, it is also released in association with 300 Entertainment, which hosts several mumble rappers and whose creators' main mission has always been to turn out the most popular music, not necessarily the most publicly beneficial music. It comes as no surprise then that No Shame has plenty of demons.

The new project features some new storylines, the accuracy of which is questionable, and a general change of course for Hopsin yet they’re highly problematic. The bulk of it revolves around the plot of Hopsin splitting with his cheating, stripping girlfriend who is also pregnant with his son, a perfect storm of relationship misery and misfortune. Poisoned by angry misogyny and bitterness, Hopsin slings dirt around and about, with a resentful fixation on his departing lady. It’s depicted that she is all bad and that he is pretty much fine.

More wicked and toxic than ever, Hopsin has obviously been badly influenced by 300, alternately vulgar and sexually grotesque, self-absorbed, and sick and twisted in tracks “Money on the Side,” “Black Sheep” and “I Must Be on Somethin” respectively. When he aims to sound serious he’s instead a monotonous, emotionless talk-machine, and the ninth entry in his signature “Ill Mind of Hopsin” series is reserved for him to explain the break in the family to his new son, with blame that doesn’t go around but is rather plopped all on the woman.

In an ironic, hypocritical twist, “No Words” vocal-drunkard Hash Brown (from Pound Syndrome) returns to be further ridiculed despite his voice actor being on a label that directly supports that same type of artist. But the problem is not alleviated by Hopsin rapping clearly and articulately. He must also rap in a socially responsible manner, which he does not do in No Shame. Hopsin has went the shady path here simple and plain. His talents have been wrenched into unnatural, uncomfortable configurations, all for shock value. Through this sordid engagement of dark tones and growth-stunted production, no one will see the light and few will make it out unharmed. (1 out of 5 stars)
Album Review Hip hop Hip-hop Hopsin music new music rap
Reactions: