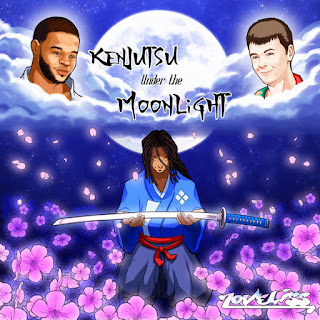 What up OK-Tho and Hip-Hop community? Today I'm here to review Detroit's own Noveliss of Detroit hip-hop group Clear Soul Forces who is back with another EP entitled Kenjutsu Under The Moonlight. I came across Noveliss back in the Summer of 2016 when he dropped his Mic Swordz EP, and I've been a fan ever since. He dropped his Dilla Instinct EP back in April of this year and he came through again, so I had no reason to believe he wouldn't make it 3/3.

I also reviewed this EP on my YouTube channel, and interviewed Noveliss himself for OK-Tho! You can find the embedded video review at the bottom of the page below my rating, along with the Stream of this EP. I also posted a piece of my interview with Noveliss below, given that it explains how the title of the EP came together.

Interview Question: So your next project that's set to be released "Kenjutsu under the Moonlight" drops on Halloween and I see that you said it's a tribute to Nujabes and your fallen best friends. Could you speak on the title of the project and what drove you to make a project dedicated to those you've lost?

Noveliss - My favorite anime, "Samurai Champloo" really inspired the title.  Kenjutsu is sort of an umbrella term for arts of the sword and it's mentioned as Jin's style in the show.  Whenever I think of Samurai Champloo, I always picture Jin battling one of his former classmates; Yukimaru in the mountains, under the moonlight, that's really where the title came from.  I listen to Nujabes beats all the time and I always wanted to create something over his work but I couldn't do it without it having some serious purpose behind it.  The loss of my friends gave me that purpose.

On Kenjutsu Under The Moonlight, Noveliss really makes himself vulnerable. A perfect example of this is on the opening track Calligraphy where he sticks to one of the themes of the EP by speaking on the memories he has of his friends, while also giving you content that's sadly relatable to a substantial amount of people and artists when he speaks on living check to check, loving rap but rap isn't paying the bills, so he works and stresses himself to the point where he feels like a failure to his friend, he feels broken beyond repair and can't stay sober. Noveliss also speaks on his fallen friends on the final track Stare at the moon.

Noveliss is sure to stick to the anime inspired theme of the EP too, as tracks Tales of A Samurai and All The Time are riddled with references from Afro Samurai, Rurouni Kenshin, and Samurai Champloo, and even skits from Samurai Champloo.

As if this EP wasn't Hip-Hop enough, on Soul Provider ft. Mic Phelps and Sword Play ft. Clear Soul Forces, everybody does their part in contributing to the old school cipher vibe. While on Under Noveliss vents on how life is getting to him and he wonders how he keeps from going under.

The last track left for me to talk about is a track I felt deserved its own exclusive section, my favorite track, Rolling Stone. Here I feel Noveliss makes himself the most vulnerable when he speaks on losing his mother, trying to be the best father he can while being an artist, and never staying in one place so he can't ever get settled long enough to enjoy and experience old and new things. The beat was amazing and I haven't felt Noveliss this much since Last Words off of his Mic Swordz EP.

As I said, given how much I liked Mic Swordz and Dilla Instinct I had no reason to believe Noveliss wouldn't go 3/3, and that's exactly what he did. I can't wait for the next project because I know he'll go 4/4.

Video Review for Kenjutsu Under The Moonlight

Stream Kenjutsu Under The Moonlight below.