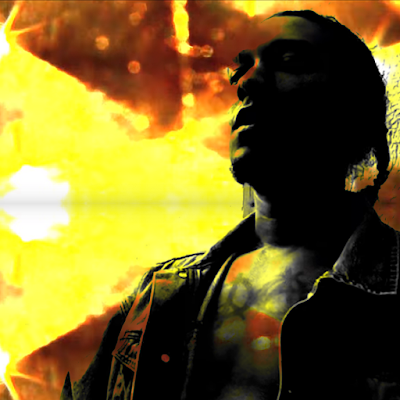 Since long before his days as a TeamBackPack Cypher favorite, Sahtyre has been representing California hip-hop with some of the most unique rap music coming out of the Golden State. His latest project Cassidy Howell is over flowing with clever bangers, but for his latest video drop "Visualize," the L.A. based artist slows things down and puts his love for fine women and psychedelic vibes front and center.

With his frequent collaborative partner Chase Moore handling the production on "Visualize," long-time fans of Sahtyre will find all of the textures and melodic sensibility that have always made the emcee's music standout. And if this is your first introduction to Saht, soak it all in: "Visualize" builds in climactic swirls, the video treatment swallows you completely and brings you inside Sahtyre's psychedelic psychology, drink deeply and it's impossible not to get pulled into his world of colorful fantasy.

Like all of Saht's music, there're layers to "Visualize" that give the track a wide appeal and addicting level of replay-ability. Musically, Chase Moore's canvas provides a stellar backdrop as always, but it's the versatility and consistent vocal control that serves as MVP in crafting the record's nuanced variations. Lyrically, Sahytre embraces and fleshes out an enticing duality, navigating the emotional turmoils of artistry as deftly as he speaks on the seductive appeals of mental escape. Visually, this single is built to captivate, pulling in the viewers eye with psychedelic effects over simple, uncrowded scenes.
The writing throughout "Visualize" is fairly direct, with straight forward reflections on Saht's mental state and hunger for recognition. But don't mistake the intentional simplicity on display here for a lack of depth or a lyrical shortcut; stream Cassidy Howell front to back and you'll find bars dense enough to keep even the most uptight hip-hop heads salivating, "Visualize" has no pretensions in that sphere. Embrace the songwriting and hypnotic feeling Sahtyre's evolved vocal delivery elicits, dive deeper into Cassidy Howell for the elite wordsmith bars.

Surrounded by people yet I still feel lonely. Come be lonely with me Wednesday I'll be playing @lowendtheory and @s0calhoun & I have something really special planned that we've never done before 🌺
A post shared by Sahtyre 💔💋☠ (@sahtlsd) on Oct 1, 2017 at 11:40pm PDT

With more music videos on the way for Cassidy Howell and a vault full of unreleased heat bound to see the light of day soon, it's a perfect time to catch up with one of the most consistent MC's in California hip-hop. Pass on the video for "Visualize" to a friend who's not scared to get a little weird, and follow Sahtyre below to stay up to date with L.A.'s busiest L.S.D. enthusiast.